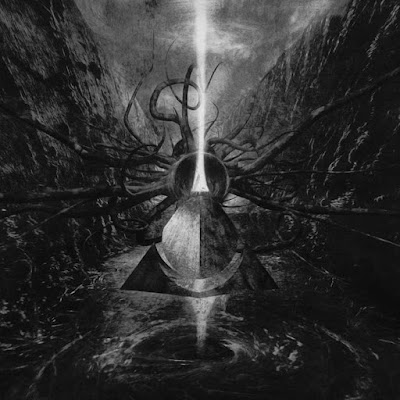 This Spanish band summons a cloak of murky rage on their newest release for Seasons of Mist.The guttural vocals are a throatier grunt than a black metal band might employ. Yet the dark dissonance churn of guitar alludes to having at the very least black metal influence, while the great of the band grinds a more sludgey form of death metal. The death metal gets dialed up on "Spearheaderon". This is done with a similar grit that Ulcerate once possessed before they began to smoothly refining their approach to death metal. By the second song I am still not sure what genre this falls into , but I do know it is dark as hell and that goes a long way with me. They do clear up the fact they can write a song on "Spearheaderon" which is perfect timing as after one song of immense heaviness, I am not as impressed by volume and density . They do prove they can not only write songs, but can keep them in the three to four minute range.

It would be hard to think of "Cataclysmic Triada" as anything but death metal. They are not slaves to 80's Tampa death metal. While the guitars have winked in the direction of black metal up until this point the prove to be total converts of death metal three songs in. The tomb like mix finds the drums sometimes buried behind the guitar. The double bass peaks out on some of the accents to "Fold Eksis" before the blast off into a raging sea of metal chaos. "Rift" has a more weighted doom pound to it's more deliberate tempo. This however does shift in to some faster blasting. "Orb Terrax" is a reminder that they are capable of pulling out a variety of rifs , but when the go into a blast it sounds like every thing else.

Once I find myself half into "Weighteer" everything begins to sound the same.Death metal can have as singular mindedness to it's aggression, so it is not surprising that due to the monochrome nature of  what it is , I might find myself continuing to make these conclusions. At six and half minutes this is the album's longest song. They do not feel the need to use this time to impress anyone but themselves. The album closes with "Barrier" which doesn't do much to set it self apart from the other songs. The drummer loses his mind and cuts loose. The last song drones out in the end on slower not , but it's not a magickal shift into something ground breaking. I'll give this album an 8.5 as it does capture a very dark mood that is an equal to it's heaviness.