Apocalypse Orchestra : " The End Is Nigh" 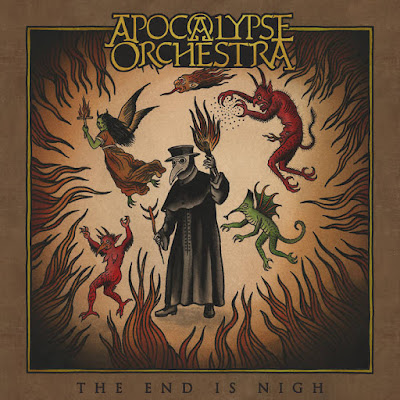 So the problem I have had with folk metal is it is either too happy and basically just drinking songs or they try to over do it and it turns into nu-metal with folk instrumentation. This band from Sweden, seems to have all of that balanced out pretty well. The production is incredible so the guitar slap you in the fucking face.It has a groove that forms a call and response with the clean sung folk vocals. Harsher vocals make an appearance on "Pyre" . They might be doom , but don't wallow in the lingering tempos."Flagellants Song" is steeped in old church music with choral vocals. The church music theme continues with the pipe organ sounds going into "Exhale".  At times the remind me of a slower version of Tyr.

They shift dynamics on 'the Theater of War"with acoustic guitar and vocals moving out of the baritone bellow and using a lighter and a few notes higher than what has been presented s his normal range. By the time we get to the chorus it's built up in layers. There is a more doom like melody to the guitars of "the Great Mortality". This album is like the new Spirit Adrift in that they are a metal band that incorporates sections of doomy riffs into their songs, but that doesn't make them a doom band. I would say they are a dark folk metal band. If you don't know what makes a doom band around here then feel free to click around more to learn.Though I will admit this is more of a doom album than Spirit Adrift, these guys are on the fence at times.

The last song "Here Be Monsters" is a respectable ten and a half minutes. All the other songs are under the ten minute mark, More growled surface on this one. Never to these guys aspire to be blackened anything, it's like this was made in a 90s vacuum. I think they have a very solid idea of what they want to do and don't jump on anyone's band wagon. Midway into this one I do wonder how they are going to keep this up for another five minutes. The answer is with a gloomy spoken word section, before going into more of a waltz. I round this one up to a 9, I really enjoyed it and it was good to here folk metal done right with out a heavy dose of cheese.

Email ThisBlogThis!Share to TwitterShare to FacebookShare to Pinterest
Labels: " The End Is Nigh", album review, Apocalypse Orchestra, folk metal, sweden