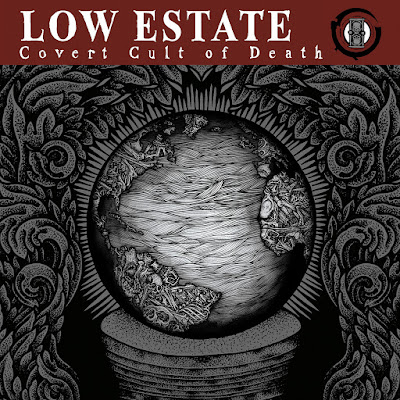 The album title must refer to the fact that despite the hipster marketing, this is death metal mixed with Amp Rep styled noise rock more than it's hard core or black metal. There are touches of black metal influences in the guitars , but not enough to make these guys actually black metal. I originally checked these guys out because the drummer from Sannhet is in this band, but they do have a powerfully heavy sound. The fact they deliver this pounding with more smarts than the average death metal band speaks to their strengths in terms of how they have crafted the over all sound.There is a more sludge like tempo to "From A Sliver Tongue". There is a dissonance to their aggressive chugging that keeps things interesting.

There is a smoother more melodic groove to "Comfort In Futility" which is the first song that really sells me on their brand of death metal. There is still a chaos to it. There is more attack on "R- Complex" to the point of going into blasts. Sung vocals eventually crop up on this song. They just call out ominously in the background. A cleaner guitar tone opens up "Circle of Error". The bass tone is pretty fantastic here and the song has a darker creep possessing it. They border black metal here , though dipping their toes into it even to this extent doesn't make them a black metal band. "Days of Days" is more of a full frontal assault. The sung vocals come back in with a Swans like baritone.  Dwid from Integrity joins in on the more Converge like metal core of "Masked Illusion" which works with with it's jagged dissonance.

The mean ass bass tone gives heft to the riff going into "Forced" . They are like a more rabid version of the Jesus Lizard here. The more spoken vocals give a more post-hardcore narrative to this brand of hybrid metal. Three and a half minutes in and its hard to not nod your head to this. There is more of a whiplash to the mean spirited stomp of "Shame". One thing these guys have going for them is they don't drag the songs out .Instead they cram a great deal into each punch these songs throw. I'll round this up to a 9, despite having the feeling I might not get a ton of mileage out of this one. A lot of bands these days thrown genres together to create this kind of hybrid these guys do it in a way that still feels like the own it.