Converge : "The Dusk In Us" 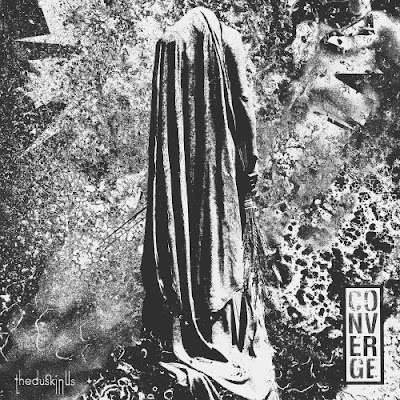 20 years ago I got into this band called Converge. Someone told me they were like Sunny Day Real estate if they were a hard core band. In the 20 years that passed they haven't let me down, though things have changed. Guitarist Kurt Ballou is now an experienced producer. With the guitarist behind the mixing board , the guitars are warm and organic sitting in the mix with every thing else. As I was listening to this new album, my iTunes shuffled it and "the Saddest Day" came on reminding me of what I fell in love with so many moons ago. They are the same band and at the same time they are not , but I have always respected what they have done. "Eye of the Quarrel" makes it pretty clear that their punk side has not gone anywhere. Bannon's vocals are not screamed with the same brand of emotional tumult that they once were. In fact you can understand what he is yelling pretty easily.

More of the grit that I want from them returns on "Under Duress". The chorus delivered in a throaty bellow. The drummer uses this song as a chance to get creative and throw in oddly timed punches. The spastic math acrobatics of "Arkhipov Calm" is what you expect from post-"You Fail Me" Converge. I have already seen the video for "I Can Tell You About Pain", but it connected with me when I listened to it through head phones. At just under seven a half minutes the title track is the album's longest running song. It's the moments where Converge indulges their more melodic side that resonates the most with me. Bannon's singing voice has come a long way. They are one of the rare birds that when you see them live you are only getting on side of the band as the more melodic fare proves to be the most unlikely for them to play live.

"Wildlife" is a better representation of what the band sounds like live. Though Bannon's vocals live are more barked than the punk manner he is spitting out clearer cut lyrics here.They tap into a unique blend of atmosphere and tension on " Murk and Marrow". There is a more Amp Rep styled noise rock to the bass driven thump of "Trigger". Both "Broken By Light" and "Cannibals" are short explosive bursts. The difference being the thrash metal riffs thrown into "Broken By Light"  , where "Cannibals" is almost more punk blasted grind core in it's outburst. Strummed guitar is not the first thing you expect from Converge. It's done in a rough around the edges , with the vocals falling somewhere between being whispered and sung. It evolves into more actual singing which might make this the Converge album with the most clean vocals.

It closes with "Reptillian" one of the songs that preceded the release of the album. This is one of the album's most clear cut metal moments. Metal is something thrown in for a few measures here and there in other places , but here headbanging is in full effect. I'll round this up to a 9.5, which falls in line with their more recent work, but not "Jane Doe " or "When Forever Comes Crashing" level. Converge fans will still be very pleased .