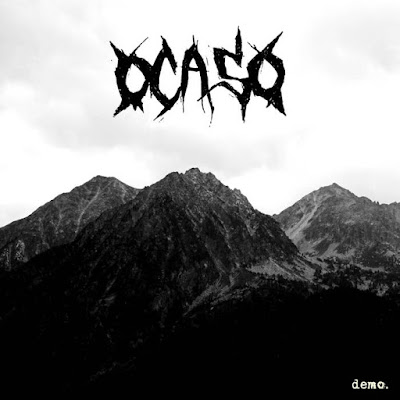 At this rate I might get caught up on everything worth hearing before December when I am cramming to make my end of the year lists.This demo was released way back in March. Its a band from Germany that has an nice dark sound. It might make you ask where does sludge begin and neo-crust end. Another question is does having a violin part automatically make you neo-crust , folk or otherwise? It starts off sounding better than a demo until they converge into a heavier section that requires them to speed things up. I think there are more battle metal elements at play than this band wants to confess to. Some of this lies in the darker mood being conveyed.

When the band is working to cleaner tones and giving the song room to breathe they are playing more toward their sweet spots. There is a pretty powerful chug to the title track. For this being a demo they vary their guitar tones here to good effect and lock into some really riffing. The dry rasp of the vocals which would fall more toward the crust side of the equation, are the only dull quality, but the guitars are making things interesting enough to make that barking a mute point. Though the do on occasion venture up into more of a anguished black metal yell. There is more of a gallop to "Humans" which is more straight forward than the first two songs. The bass player runs further up the neck to give it more of a Iron Maiden feel. There is a more melodic feel to "Mediale Sucht" . The vocal switch into a more choked higher rasp that forms more of a call and response with the main vocal. This song has more dynamic ebb than what we have heard up to this point and rides the line between post-rock and black metal. If you are only defining black metal by blast beats than it's not black metal, though the tremolo guitar of black metal is present to some degree.

If this is just this band's demo then I would really like to hear what this band could do with proper support of a label in a real studio. The results would be stunning I am sure. My only complaint is I wish there was more. Not sure if this is something I would actually listen to on a regular basis , but there is no denying what these guys have done here. I think the kind of maturation in song writing I would need for this to be something in regular rotation would come if this was a full length in a real studio. So I will give this one a 9.