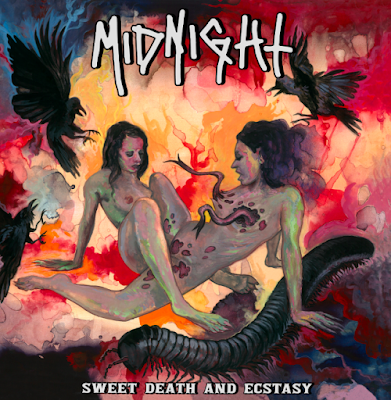 There is a much more prevalent Venom influence on the opening track of Midnight's new album. The guitar sound is bigger and carries more weight into it's chug. While the metal factor has been dialed up, they have not turned their backs on the more punk side of this band as apparent on the second song "Penetrated . Most of the guitar solos on this album sound like they are straight from a Motorhead record. There is more of a march to " Here Comes Sweet Death". The chant of the  chorus has more of hook to it than the previous song. "Melting Brain" is not as smartly crafted and more one dimensional. The Motorhead influence goes beyond just guitar solos on "Rabid" . I am fine with this as it means they are being more thoughtful to vary things up with catchy punches.

It took me a moment to release "Bitch Mongrel" was not the previous song "Rabid". It is different as it's more Venom than Motorhead. "Poison Trash" stays thrashing, but is a bit of a one trick pony until it goes into more of a moshy groove. Well this album is bookended by two really strong songs as the triumphant gallop to "Before My Time In Hell" is pretty powerful. So we know they can do it when they step away from their Venom and Motorhead albums and lay into the gallops. Not that there is anything wrong with being influenced by either band, but I think Midnight has a personality of their own that I would like to hear shine though more often.

Despite the band brazenly wearing their influences on their sleeves , this album sounds better than the previous one. It has two songs that are absolutely killer and the rest are pretty decent too. I think they were successful at creating the album they set out to, it does take me back to a point in time when metal was more dangerous so that gets them points in book. I'll give this album an 8. I don't see myself really wearing this one out , but fans of the band will enjoy it.