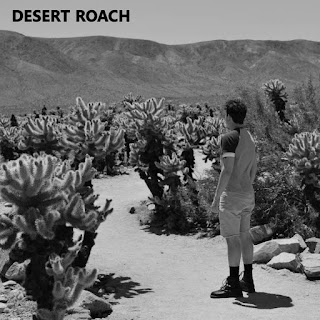 When you throw words like industrial and death rock around it's easy for me to get my hopes up. I have been reviewing albums long enough to know better, but there is still that idealistic teenager in me who needs to listen the the older wiser and jaded version of me that has heard this all before. First off the mix on this album is odd. It's minimalist in some places and has a guitar tone that is wanting. It's a lesson why being a one man band might not always be the best idea. Wreck& Reference would be a good point of reference to wreck and illusions that this is soooo original.  The more screamed vocal could use some effects on it. There is a moodier version of indie rock that is not tense enough to be post punk no matter how much the vocals yell. If this had better production it might all work. Instead it sounds more like a demo than a album. Sonically there are some decent ideas sprinkled in, but if he had a different set of ears , then things like the more aggressive yelled vocal should have never left the gate.

The yelling works a little better despite the iffy mix on "Tennessee honey Queen" . The lyrics sound like they are left over from high school. "Mojave" would have worked better if he had a real band behind him. He keeps yelling about god, which is one of this albums themes. Even hearing "Six Six Six" which comes the closest so far to being death rock thanks to the bass, line it is hard to hear how some one could refer to this as death rock. "The Dirt" does have darker Joy Division feel to it, though still not death rock. By the time we get to "Alive" it's clear this album is showing signs of improvement. I guess I am getting used to the shitty production.It does begin to get darker, though this album is not however dark enough for me to brand it with the Gothtober seal of approval. The vocals are at their best on "Vacant Mind". I like the dreary drone of this one. Congrats that he wrote a song that is actually good here. He yells about cumming in someone's mouth on the last song which has a decent guitar part that floats in the back ground, the solo like guitar melody though is too far up in the mix so the results are odd. I'll give this one a 7 which is a lot fucking higher than expected. I had to round it down , because the production almost made it difficult to listen to in the first place. He did prove he cane write a song and there are some good ideas that could have been better realized with more hands on board.