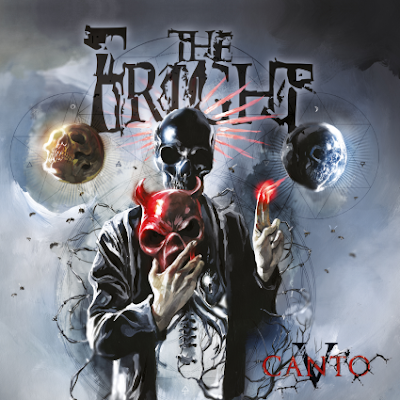 Singer Lon Fright who obviously named this band after himself claims to love both goth and cock rock, so we are getting something not unlike H.I.M. which is more like the classic era of love metal, though I can hear some 69 Eyes fans getting excited for this. The singer has a great range, as he belts in his baritone register and can get up into a more Bon Jovi register with some grit to it.The tightly harmonized vocals at the beginning of "No One" are pretty cool. This album is well produced. Their producer knows how to get the big arena sound and the more bat cave sound. But it's more foot on the monitor rock on the second song with layers of vocals. The return to the more goth sound feels a little Billy Idol on "Wander Alone" which is kinda of the cross roads of the two if you think about it. I am not as much of a fan of the chorus on this song, it recalls many of the elements I didn't like about hair metal in it's hey day.

I wish more of the guitar parts were like those in "Love is Gone" as when they get into the major power chords it's a little too upbeat for me, but this song is a better of the metal elements. He finally reaches up into more of a metal yodel in the background of "Fade Away" which is a power ballad. The guitar solos could stand to be more rock god like. I mean if you are going for it , then go epic. They start off more goth with "Oblivion" then I find myself waiting for them to blow it up into arena rock which seems to be the formula. The two sides of this band start off wrestling, but the hair metal one wins out on "Leave" . While I have zero emotional attachment to 97 percent of all guitar solos, they do let one rip like I knew was waiting inside of them on "Drowned in Red". The collision of styles also makes for some almost Danzig like moments.

There is more of an creeping power ballad feel to " Century Without a Name" . They wave the cock around when it comes to the chorus. I am not sure how the dynamic shift works going back into the second verse. German is always more goth. Even despite the brighter notes played on the piano that sit behind the strummed guitars of the last song. I'll give this album a 9. I had to round it down from a 9.5 as some of the arena rock parts are too happy for me. Overall it's a solid combination of the two though I can't help but thinking this album would have done better during the Myspace years.