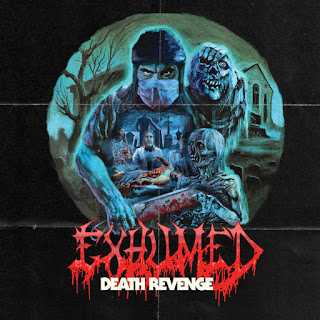 So I dipped into this album because I was reviewing a pop punk album and it was getting to be too much for me and needed a breather. So I bean alternating back and forth between the two albums. They could be at any further ends of the spectrum that is for sure. These guys are machine like in there approach to old school death metal. Matt Harvey is the only original member in the band. A couple of the guys do go back to 96 , so they have paid some dues. They consider themselves gore grind. They are less punk influenced than say Ghoul. Typically this sort of thing is a little too straight forward for me and not dark enough, but the do have some catchy riffs. They only bore me with blunt force on "Dead End" . It is obvious they came out of the more Exodus end of the thrash days. Death metal grew out of this more than "Scream Bloody Gore".

If you have any doubts about death metal's thrash beginnings then check out that Slayer riff in "Night Work". It all comes together really solidly. This is the first song that hooks me in all the way.The moshy riff midway into "Unspeakable" makes it more interesting than, "the Harrowing". Then the need for speed begins to mire them down a little and the monochrome emotional range of this genre sets in. All the songs are of course about death. It's when they are finding the more Slayer like grooves that the band is allowed to fully function to the best of their ability and I do not mind the dive bomb Slayer worship of the guitar solo's since Slayer doesn't sound like Slayer anymore. The symphonic interludes are not a real ground breaking distraction from the meat of the metal. I think when the guitar echoes the melody of the strings however it is more effective.

The vocals on this album are a trade off of deep gurgled growls and higher more snarling rasps that are sightly Obituary like in their exclamatory phrasing .One of the album's most impressive moments it the instrumental 'the Anatomy Act of  1832".  It's not an interlude , but a fully fleshed song that keeps your attention throughout.  The bass tone has a thrash like picked rumble when it does become audible, but the main stage spot light of this and most death metal is the guitar and drums. The double bass is pretty smoking and the guitar are mean enough sounding to get the job done , but largely keep the tone planted firmly in 1998. There are some sections of guitar harmonies that find them in melo-death for a verse here and they are largely committed to being brutal.So if you want 90s flavored death metal and are too young to have caught it the first time around then this will seem very fresh. If you just want aggression out of your death metal, these guys have that I'll give it a 7.5, it's a solid album, when I want to hear this sort of things I'll go with something from that time period I am more drawn to like Deicide.