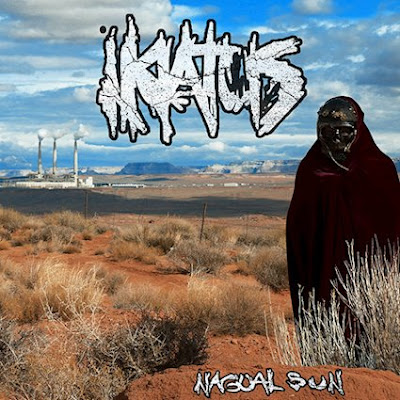 The new album from this Chicago band  opens with the hypnotic throb that I miss from Jesu. It does gather speed and builds into more of a sludged out chug. The bulk of the vocals in a throaty bellow though so robotically effects dripping sung vocals come it.  The bass player and drummer have run the gambit in terms of bands  having played in acts like Bury the Machines, Yakuza, Lair of the Minotaur, Serpent Crown and Earthen Grave. The first song builds up into a blast beat that oddly has little to do with black metal. Feedback flourishes as their sound is very blown out. I can imagine they are  loud as hell live.  They once again indulge atmosphere by taking their time to kick into "Serpent Cults". Its more up tempo than the first song and places them more firmly as a sludge band, with slight crusty tendencies.

The lines between doom and sludge sometimes cross like at the very beginning of "Sorcerer's Gaze" where I can hear some Celtic Frost influence. When he tries to sing going into the chorus it reminds me of Chronos. There is a break that sounds like they are going into anther song then then come back playing something closer to black metal. I am not sure the point of this.It's not bad , it just doesn't compute in my head as to their motives in terms of songwriting. They ebb and flow back from a monolithic lumber to twinkling atmosphere on "Moment of Devastation" . One things I like about this album is the harshness is balanced out by the many colors of ambiance they have painted the corners of this record with. This steers it towards that sweet spot I want where it is heavy sonically as it is metal. Many of these sweeping sounds grace "the Alivist" .

There is a denser heaviness to the mid tempo rumble of "Jaws of the Shark". The vocals take a lower death metal growl. After an interlude of noise they ease into the more "Planet Caravan" like intro of "Final Communion". It doesn't stay dreamy long enough for this to be considered a sludge power ballad. It does ebb back down after the first heavier chorus section. I'll give this album an 8.5, if you are into sludge but want something different than Neurosis worship then this is an album well worth the investment of your time to check out.