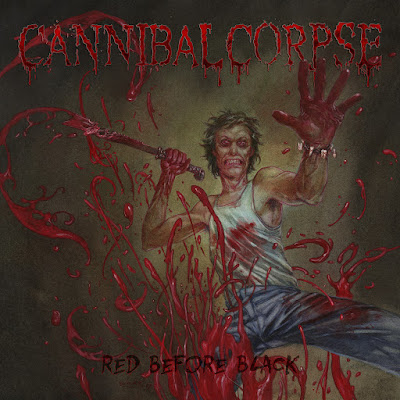 14 albums in, I don't expect any surprises when it comes to these guys. They have become much more polished over the years. While I prefer Chris Barnes, I have accepted Corpsegrinder as their singer by now. It might be my ears , but it doesn't sound like Corpsegrinder's vocals are as low and guttural as what I recall hearing previously. He is at more of a mid-ranged bark with certain words accented with more of a growl. This albums feels more frantic than the others though this also might be a case of the guitars being more polished . The vocals are not the only thing that doesn't sound like it carries the same weight of the low end. The guitar tones are mixed with more mids in them as well. I remember the guitar tone from the previous album have a meaner more ballsy tone, where as this has more of a thrash feel.

This also might be how they are played as when the chords slow down on the intro to "Code of the Slashers" it sounds heavier. This is the sound I prefer from these guys as I think Cannibal Corpse doesn't sound good at ultra fast speeds as it sounds like they are rushing through the songs. Toward the end of the song when he growling about ending your fucking life they lock into a really powerful chug. By the time it gets to "Shedding My Human Skin" it's evident that lyrically these guys are not as graphic as they have once been. Four songs in and I have not once heard a reference to any sexual mutilations. The album art work also reflects this as it just depicts the blood splatter of some one slinging a knife. This is from a band known for having their album art work band, and considering the fact their record label no longer has big chain record stores to appease it seems like they are getting soft in their old age.

"Remaimed" is a decent enough song. Better than any band trying to imitate them but not what I would call classic Cannibal Corpse. The come at you with a renewed rage on "Firestorm Vengeance". They proclaim " no mercy for the merciless"  and the guitar work is more intricate , but it doesn't have the same dangerous feel as their older work. They demonstrate the kind of single minded aggression death metal is known for on "Heads Shoveled Off". The main riff to this one has more drive and almost a groove to it's chug before the more blasted sections. Corpsegrinder's tone might not be as brutal but the lyrics are easier to make out on this album. Their bassist claims this album has a rawness that goes beyond what they've done, but I think it's more compressed and streamlined. This is not uncompromising , but rather the sound of death metal compromises. Not in a plea for radio play, so I would not say it's a sellout.

It might be this album's need for speed that makes it not come across as heavy to me. "Scavenger Consuming Death" does grind into the riff on the chorus for a more engaging listen than just trying to blast past you. While one of the stronger songs I did have to go back and give "In the Midst of Ruin" a second listen. I think even the faster portions of this song work with what they are doing because there are more shifts in dynamics. I guess the "kill or be killed" section of the song is the chorus as it makes the rest of the song work. "Destroyed Without a Trace" is more in your face and straight forward, not that this album throws many curve balls or ever becomes introspective. "Hideous Ichor" is another cut and dry beating to your ear drums. I do prefer how the drums and guitars lock in on this one more than what happened on the previous song. I'll give this album a 8.5, it's solid and shows the other bands who this is done, it just depends on if you need more than the meat and potatoes of what is being done here and makes you wonder if they should take a few more chances, though I think where the edge they used to hold was in the more gorey grit of their old lyrical approach.