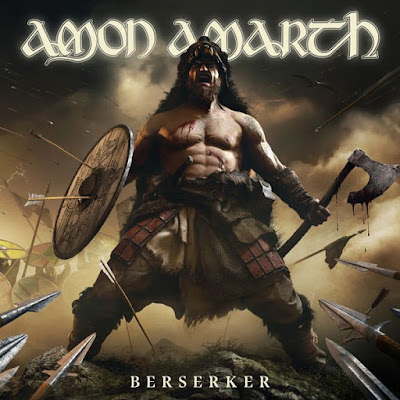 These guys are more of a death metal thrash hybrid with catchy riffs than what I would call "viking metal" , They are more about the double bass than any kind of folk elements worked in. Sound effects leading into a song don't count. Any one dial in a sample. Sure they might have a viking ship onstage, but who the fuck cares when it is playing on your iPod.  These guys are good at what they do, but are they bringing something new to the great hall or just warming up left overs. The guitar harmonies on "Crack the Sky" is almost too happy, it does get a little angrier going into the chorus. The vocals have not changed at all and are pretty one dimensional. The guitars are their main strength. While I would not say their are folk metal or power metal, the problem I have with many of those bands is they have a little too much frolic in their riffs.

The songs are rather compact. When the lead growler uses his lower growl it is more effective. On "Shield Wall"  they prove to me that they can write a fucking song. But can they keep this up? There is more of a thrash feel to "Valkyria", it's nothing special. The opening riff to "Raven's Flight" sounds like an out take from the "Pain Killer"album with out Halford.  We are back to getting left overs warmed up. Even though the guitar tone changes leading into "Ironside" it goes into the double bass driven same old same old that is beginning to bore me. Lyrically it seems like they pulled everything from the vikings show, I guess they skipped history class.

The albums strongest moments is when they slow their gallop and are more deliberate with it. "When Once We Set Our Sails" is a little more melodic , but this guys growl has gotten old. I can see where teenage metal guitar players could really get into this think 13 or 14 is when I would have really dug it. When I was 15 I was getting into hard core and it would have felt silly. These guys are hit or miss as going into "Skoll and Hati" its speed up and gets heavier. I think the vocals work better on this song, but it's pretty straight forward racing gallops . "Wings of Eagles" could have been any of  the other songs before this. "Into the Dark" is marginally more melodic and the big epic scale guitar works well here, there is also cool break down like riff at the end. However they fall prey to the rule here which is "cool riffs alone do not make a good song" This is well done and sometimes really hits the mark. Despite it seeming like these guys are making the same album over and over, I will give this an 8.