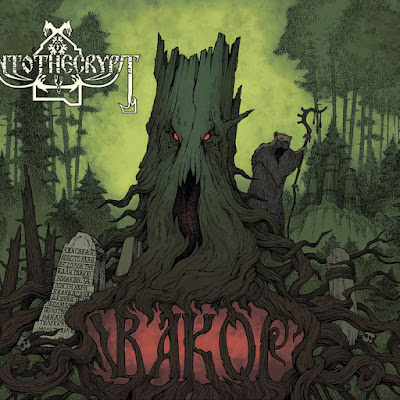 This Russian band is technically folk metal it just so happens the metal side of the equation is death metal. So the big cinematic sound they conjure is in the same part of the woods as perhaps Moonsorrow, just with a less frosty viking feel. The title track is a little more upbeat and straightforward than the first two songs which are in a darker part of the forest. The are almost like a death metal Dead Can Dance on "Yavi Sya Merek" . Though after I typed that I realized that a death metal Dead Can Dance might be another way of  saying it reminds me of old Negura Bunget. Instead of really wallowing in the atmosphere the gutiar tend to chug ahead without stopping. When sung vocals come in they do so in a less than predictable fashion.

There are moments that are darker and more brooding. At the end of the day while I prefer dark, I will compromise it by a few degrees for songs that really grip me. They do a good job of employing melodic tension as needed. "Deko Po Markushe" opens with female vocal that work better than the bellowing grunt of the vocals. The folk elements begin to fade into the edges of the song as window dressing for mid tempo death metal. The song after this falls into a similar formula. "Dolne Videnie" falls in line with your more typical folk metal just without the power metal like silliness. It's broken up with atmosphere that kills the momentum in a way that when it kicks back in it feels like a new song.

There feels like more Irish vibe going into "Mga". It's mid tempo death metal once again though not following a hard and fast formula. The album ends with a song that is also the band's name. It has a darker pagan feeling to it. The death metal growls have officially gotten stale for me by the last song. The album begins to lose momentum towards the end , but overall it is pretty solid and is a good example of how folk metal doesn't have to sound like elf drinking songs. ,