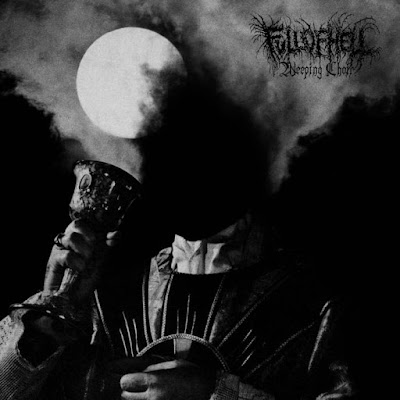 The album starts as more blackened grind core, then shifts into hard core.Most of these songs are compact and jarring .  I am not into some of the album's noisier moments, as it seems like a waste of time , when they can write effective songs, why waste it  by beating trash cans with jack hammers. They do put the jack hammer sound to better use on "Aria of Jeweled Tears". The song ends up having more of a punk edge. There is a more angular yet straight forward hard core sound to " Downward", though this is  thrown up against death metal grunts and blast beats. What they do is so heavy that it carries a very abrasive quality .

I like when they slow down more the more tortured sludge of "Armory of Obsidian Glass". It is one of the darkest songs so far. The last two minutes of the song get into ghostly atmosphere before hammering you with something more like black metal. There is a more death tinged grind core sound to "Silmaril". It is pretty dense , though not my favorite song  the album . Even though it is very blown out sounding I think the more industrial stomp of " Angels Gather Here" is more interesting. "Ygramul the Many" is back to their more chaotic blend of grind core.  They do not relent on "Cellar of  Doors "  though it is on the more death metal side of grindcore.

I respect what these guys do. I am on the fence as to how much I will actually listen to this album. I will round it up to an 8. as it sounds good and these guys did what they set out to accomplish,. If you are already a fan of this band then this is what you are looking for. I do not think this is going to broaden their fan base, though more open minded fans of death metal might appreciate them.