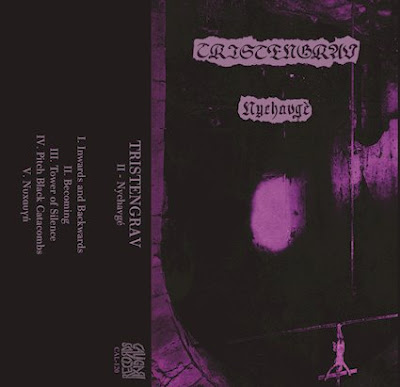 Mixing punk with death rock is not new. Mixing black metal with punk is pretty much how the second wave came about. I have typically been a fan of black metal mixing with death rock as long as the right elements from both are used well. This band from Greece uses the more death rock trappings as atmospheric window dressing , but make their bed in metallic punk. The vocals are more of a black metal snarl. Yes there are blast beats , but as of the second song I am not tired of them. This trend doesn't change on "Tower of Silence". They keep raging ahead pretty hard. The guitar tone has some death rock like effects, but that is about it a far as that side of the equation goes. The could be Darkthrone during one of their more punked out black n roll moments. I do like this more than if the darker undertones were not there and this was another punk band trying to play black metal.

For a demo this sounds pretty much like an album. With all three genres , production is not the top priority.  There is a interlude of clean guitar before they go hurtling into the thrashing pace of "Pitch Black Catacombs". The press release for this mentioned Rozz Williams being an influence and I can't hear it, unless the mean the seconds of mumbling that was low in the mix. So it is obvious which genres I am rooting for. I want the most of death rock, then black metal with punk being the least of my concerns. I think regular readers will concurs this is no surprise based off my taste in music. The problem here is what I want most I am getting the least and they are teasing me with it.

Despite the lack of death rock., these guys are good at what they do. They need to quit teasing with the darkness, they way they merge punk and black metal works. This album sounds really good for a demo, I am interested in what the end result will be when they do decide to make an album. I will give this an 8 though I am not sure it will get much in the way of repeat listens from me . If you are into punk tinged black metal this is for you.