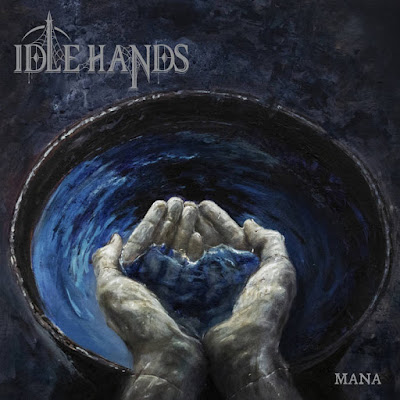 I am a sucker for goth being mixed with metal. The times when this is well done is dwarfed by the times it is actually a Hot Topic haunted cheese fest.  Really the lyrics are the only over cheesed part. The guitars are the most metallic thing going here. If this had been replaced by a more death rock approach these guys would sound more like Bellicose Minds. I like the more melodic tension of "Jackie" even though it's not as metal. I am willing to compromise heavy for a good song.With "Don't Waste Your Time" I can hear how  AFI is another point of reference.  The baritone vocals are well done. I am interested to see if this guy is a one trick pony or not. The quick growls or attempt at grit are not his strong suit. In fact it's the only part of their sound that comes across somewhat amateur.  The metal guitar solo is pretty on point.

The guitarist is clearly the metal head of this band. There is almost an old Ozzy feel to the riff going into " Give Me to the Night". This is not the strongest chorus on the album.   I can hear where people  might feel riffs like these have this band leaning in a power metal direction. I think the fact the vocals are no operatic keep it from going there. "Blade and the Will" finds them doing this juggling act between horror punk like goth and old school metal. "Dragon Why do You Cry" is an odd power ballad, but it works. I think the lyrics to this song are less silly than some of the others we have already at this point in the album. We begin hear him to reach out of his chest register.

"Double Negative" finds the pace picking back up. There is some interesting syncopation on the verse.  It almost sounds like one of Queensryche's darker moments.  The power ballads keep coming with some stronger than others. There are  moments somewhere between the two like " A Single Solemn Rose". It's more uptempo, think the Police. The title track is a little more metal, though this album does back off a great deal in the second half. It does wind it's way around to a solid groove.  I will round this one up to a 9. Lyrics aside it hits more often than not. I think all the elements of the two primary styles meet in middle.