Hands of God : " Blue Print For Self Destruction" 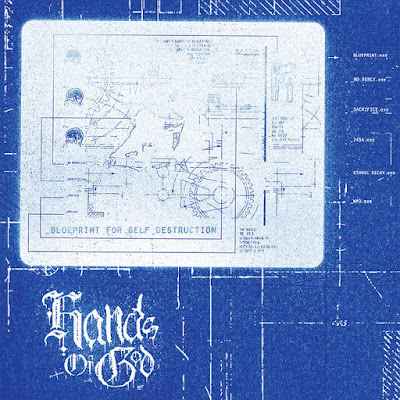 The first song blends an early 90s style of cross over hard core, that was before the Myspace days put the emphasis on breakdowns. The vocals are shouted.There are lower death metal grunts as back ups. The lyrics are socio-political which is appropriate considering the genre. They are good at what they do. The thing about what they do is that it is not all that original as I have heard a 100 bands do this before 2001. The key is since not many bands are currently doing this it makes it more effective.

It is when we get into the meat of the album  with songs like "Sacrifice" and "245a" that things being to get somewhat weighted by the adherence to the more typical trapping of traditional hard core that give them a more uniform sound. "245A" At least benefits from a strong enough groove to inspire enough head nodding to make the conventions of the genre muted at least on the first couple of listens. These guys are as good as any of the Victory records bands, though the employ the metallic side of what they do as secondary factor to the street wise slam of the riffs.  "Ethnic Decay" makes even more use of the break down groove and gather momentum.

The strength of this band is the fact they don't get caught up in punk like bursts of speed. "W.M.D" . This song finds the anger more refined and dealt like a solid punch. I will round this down to a 8.5 ,as it is not the most original thing I have heard. I get that many or most of my readers are too young to have been around for the first time this kind of thing came about in thee late 80s so it might feel fresher to them than it does me. I do think this band nails the sound they are going for and does so with a great deal of conviction.