Varaha : "A Passage For Lost Years" 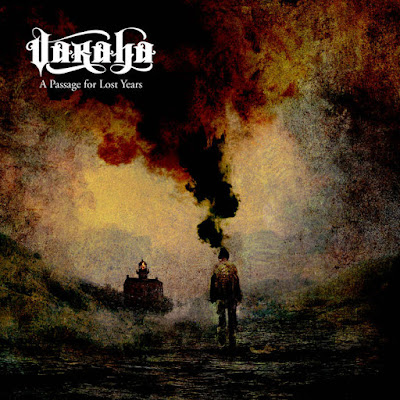 The drummer from Nachtmystium plays with this Chicago band. After the first song I am baffled as to why they are being called a doom band. Is their a darker melancholy to their sound? Yes. But this feels more like a cross between Opeth and Agalloch. Both those bands had a darker tint to their sound at one point in time, ok Agalloch kept it til the end Opeth lost it ten years ago. "Midnight Calls" feels more like an orchestral interlude. "Climax & Exile" has a more Katatonia like sound. I feel the harsh vocals coming in when it picks up the pace is a cop out. In fact after some depressive atmosphere there is more of a Deafheaven sound to " My World And Yours".

After another melodic interlude they return with a more flowing attack of "Refrained". There are echos of post rock in the way the guitar melodies soar. The vocals come in more down trodden in their croon. They do switch over into the harsher scowling. One of this band's strengths despite what genre they fall into is their knack for always weaving melody in some where. This album is really full of atmospheric interludes. In fact half the album appears to be just that. The sprawling atmosphere of " A Passage for Lost Years" extended even into the last song "Irreparable" . To the point that it is hard to tell where one begins and the other ends. The sounds are pretty pleasing to the years so the fact it runs together is not the greatest offense.

I will give this album an 8. I like, it is just similar to things I already listen to so unlikely something that I would listen to  a helluva lot. Still I am interested to keep an ear out for these guys. This is moody symphonic black gaze that has more of a sense of melody than their peers.