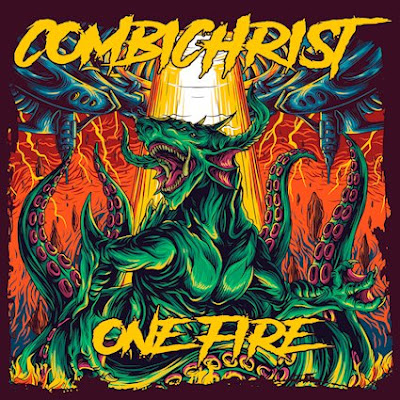 8 albums and 15 years later this project has been through some changes. By now things are more polished. In fact the opener is an improvement. There is more groove and the more metallic elements gel better. When he goes into his lower more spoken voice, it is enough for me to break up his other wise monochromatic yell. On the second when they go for a more abrasive heaviness, it doesn't work as well until the chorus. The guitars are very staccato and militant. I think this album will appeal more to metal fans than the previous efforts. The lyrics are pretty cut and past average adolescent anger empowerment. There is a more electronic pulse to "Guns At Last Dawn" until it throws itself into more of a thrash attack. I think the more edm feel of "Lobotomy" feels more natural. I think this might be the second song I have heard that references drinking.

The title track splits the difference between their two sides. I say their like this project is not primarily Andy. Though he does have partners who help him realize this. "Bottle of Pain" sounds like if Tom Waits wrote a song with VNV Nation.It's interesting and I like it because it is something different for them and I think they need to take more risks like this.  "2045" is back to a more standard industrial sound. There is a spoken narrative that trades off against the screamed vocal.It's the songs like "Undersatnd" where the electronic and heavier elements come together and find a groove together than work the best for me. Then comes the cover of "California Uber Alles" . After allegations of ties to neo nazis cropped up against Andy on social media, lines like "I'll be the Fuhrer one day"  might be given a more sinister meeting.  Not one for witch hunts and  If forced between listening to an album by neo nazis or Christians, at least the nazi's would have a better fashion sense. But I'm not here to talk about politics of any form , so  moving on.

"Last Days Under the Sun" gets marginally darker which is enough to make me content. It has a decent groove to it. "the Other" is more of an outro due to the focus on the atmosphere rather than building off anything to have an actual verse of chorus. So I am going to give this album an 8, as it suceeds in what they set ouyt to do. I enjoyed what I heard when I listened to it perhaps more than their other albums. I am not likeluy to get much in the way of repeat listens t o it as I would probaly go with Frontline Assembly when I want to hear this sort of thing, and while they are better this go around, the vocals here would probaly grate on me over time. If you are into these guys I amsure this is what you are looking for. />
/