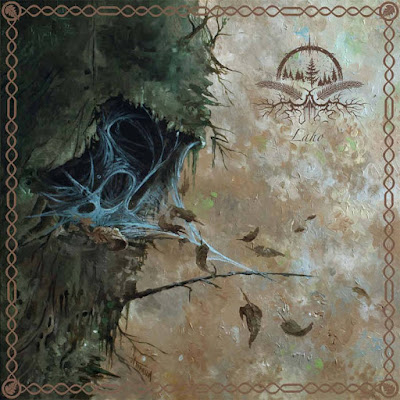 Was clicking around looking for doom and what I found instead was this Finnish depressive black metal band . These guys are dark and creepy. Most of the depressive anguish comes from the howl of the tormented vocals, but nothing is a light in these dark cloud. They groove on almost post rock passages, and by groove my head is bobbing along to this drone. It is a great blend of sonic atmosphere. I had to stop myself as I was making my best of metal 2019 so far list, because these guys might need to go on there. But would they rank higher  than the new Darkthrone I got yesterday. While they are in some stretch of the words black metal, Darkthrone and these guys are two different beasts.

The second song is more atmospheric in almost more of a post rock manner while , still keeping the mood gray before going into a more sweeping black metal. When they go into this sort of thing they are not as original as the first song. They are good at it just not feeling like we have never heard this sort of thing before. The reason it almost ranked,higher is because , while it sounds good midway into they are just working off of a sound .rather than songs . It is not until mid way into the third song that begin to incorporate some of the sounds that caught my ear on the first song. Where they do not come through is there is no groove. Not that groove is something that black metal works off of , so it was a nice change of pace.

The last "song" is more of an instrumental atmospheric outro. This album got off to a really strong start, then went off into well done atmospheric black metal, that was not as original. I will give this an 8.5 so it did not make the best of 2019 metal albums so far, unless I was doing the top 10 black metal albums of 2019 so far. It is going to take all other black metal albums that are not Darkthrone, Crowhurst or Gaahl to shoot higher than this album if they are going to make the cut.