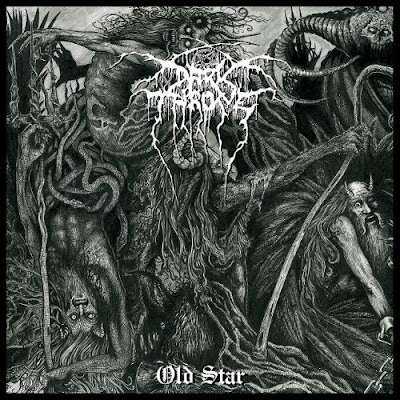 Darkthrone has changed a great deal since kicking the doors open for the second wave of black metal along side Mayhem. More punk and rock influence crept in until they were playing black n . hen they brought in a more class NWOBHM" sound. This time around they are returning to black metal though it's roots , so the opener carries more more of a Venom sound. The 80s metal chug does return on "Hardship of the Scots" and sounds l;like the riff could have come right from a Accept riff, until the vocals come in and the guitar take on a frosty sounds that is more the hard ship of the Celtics.There is a more triumphant gallop that the song progresses into. The title track captures the hypnotic drone of their earlier , but with out the blast beats  It's almost more sludge like.

"Alp Man" has more of the classic metal chug. The snarl mumbles of the vocal give it more menace. Midway the song drops down into a more doom like pace as the riff lurches around the drums. The pick up the pace for "Duke of Gloat". There is a Mercyful Fate like riffs that creeps in . but the rule is  coo riffs alone do not a good song make. This is not a bad one I am just not feeling as much as the others. They continue to have a great deal of drive on " the Key is in the Wall"  , but shift tempos . Comparing this to "the Cult is Alive" , which is more fair than "Transylvanian Hunger" the vocals are set back further so don't seem as aggressive. The guitar is bigger. They have a great guitar sound here, so that is not a complaint , but an observation.

This album is not their best, but it is pretty solid. The vocals of course the weak, point, but they have never been their strength. I am glad they are moving in a darker more menacing direction. I think fans of the band will find it easy to embrace if they have not been pretending they like the first few albums on vinyl