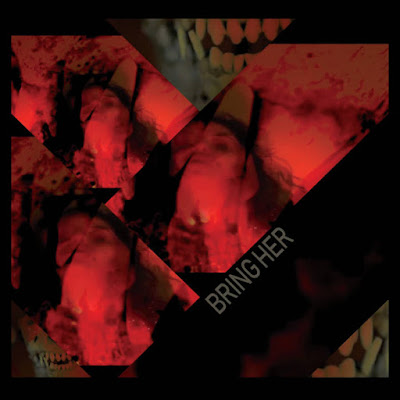 This duo claims to be sorrow wave. What that is might change depending on what song you are hearing from these guys..I like the more death rock meets dark wave more than when they default to a post punk sound on the second song. One the first song it seemed like her voice had potential and that goes untapped on the second song. Things don't improve on "Arms in the Circle" , I get that using a drum machine limits your options as to where you can take your songs, but I like what they did on the first song so that is all I am measuring them against. What I already know they are capable of.  "Choose Me Move Me" works off of a similar pulse. It begins to fade in the background a little so it's not until they divert into more of an interlude that I notice a turn in where the songs are going as they began to sound the same.

The beat changes for "Flesh in Line". It is denser and mixed well against the almost My Bloody Valentine waver of the guitars. The vocals are still moaned in a chant they just have a more ghostly feel to them. This once again shows they are capable of writing a good song. They do not compromise the weird darkness of their sound by doing this. I like the dreamy quality the vocals take on. They kept the momentum on "Eleventh Hour" . The guitar tone works really well on this one.  "Unholy Awake" is a little darker and has movement to it, but I am not sure it is as strong of as song as the two before it/

It closes with "Osiris Temple" which pretty much safely revisits the sounds and theme they dipped into earlier in the album . Overall I think this due has potential. There are some strong songs. I will give this one a 7, I have a great deal of music that fits this bill already, I guess I was hoping for something more death rock.