Lost Crowns : " Every Night Something Happens" 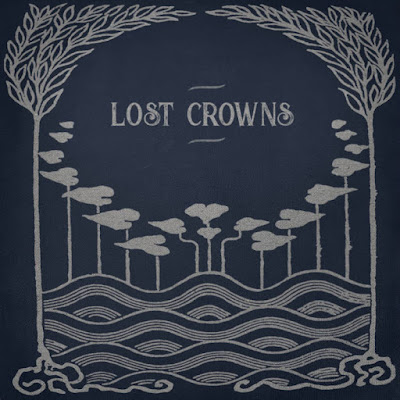 This album came out in January, so I would say it slipped under my radar, but since I am rarely looking for prog there was no reason for it to crop up. I like prog, o I am open to new prog the problem is it either sounds like Porcupine Tree or is busy noodling power metal with Journey like vocals. And rarely ever dark enough. So I am content with my King Crimson and old Genesis albums. This band pulls from that time period, This sounds like it could have come out in the 70. There is a very angular labyrinth melody to the opener. The bass hold most of the grit. There no metallic elements in play. While it is not dark there are some shades of gray coloring it and I would not say it is happy.

There is a less angular and more introspective mood to "Lost Crowns" . They get back to the more angular progressive sound on "Sound as Color" . The lyrics are pretty interesting. The vocals are sung to fit in with the winding syncopation. He doesn't have the best voice, but it works with what they are doing. I might not have mentioned the odd instruments they also incorporate to create this weird symphony. They bring in bassoons, Clarinets, harmoniums and hand bells into the equation. The last two minutes of "Sound as Color" finds the bass leading them into a cool groove, but grooves are something that happens by chance here. Female vocals also crop up in this section of the song.

By "Midas Xray" the angular and atonal sound is a dissonance you now come to expect. There musicianship is impressive, it just seems like they are not progressing and we are getting theme we have already earlier in the album until a weird watery effect is placed over the vocals . An interesting melody does crop up, but it is less adventurous than the previous songs.  I prefer songs like with the more solemn mood like "She Saved Me" this doesn't have the noodling in circles feel that their music an take on. The vocals are more layered.These guys are very British, which might play into how they get the classic prog sound. "Sandy Doesn't Know" is not as focused as the other songs and is almost intangible.

They pull things back together on "Let Loving Her be Everything". It bounces around with a smooth dizziness.  You can hear the jazz influence on  the drummer here. The album ends with darker " Star of My Heart". It is a more abstract song with jazz like piano passages as it floats into ghostly realms. I will give this album a 9, it's pretty solid m not sure how many spins I will get out of it , but if you are a fan of progressive rock you need to give this a listen.
Posted by Wilcifer at 12:36 PM