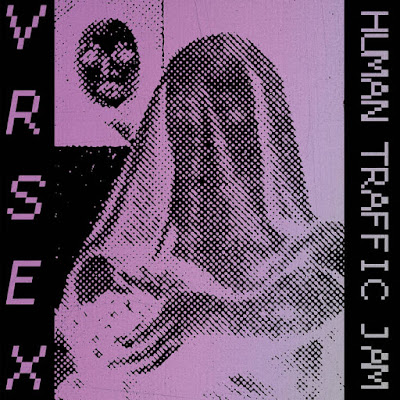 This California band's album opens with something closer to death rock, with ghoulishly crooned vocals and almost new wave guitars. Things to do not end their so don't be quick to label their sound. "Down Grade" has a lo fi drum machine and reverb jangle of guitars. The vocals take on a more matter of fact post-punk delivery and the begin to sound more like A Place to Bury Strangers. There is more melody to "Sacred Limousine". The vocals are almost more punk. Somewhat spoken but with a great deal of attitude. This is a pretty garage like recording , but it works with what they are doing. Their lyrics are pretty interesting. Some bleak social commentary not unlike Sonic Youth.

I really like the darker drive that propels "Maiden China". The chorus is a little under stated, but over all the song works. It is almost like a more punk version of She Wants Revenge. After this song there is a great deal of experimental noise filled with weird samples. A beat bubbles out of one such sonic landscape.   Sometimes these are more like interludes though on "Cheek Detritus". "Facts Without Faces" finds them embarking back upon a more low fi dark wave with half the melodrama. The vocals are more sung and less Joy Division..   .

The album ends with more atmosphere it reminds me of bands like the Butthole surfers from the 90s, where swathes of that sort of thing connected the album, back when people listened to albums all the way through. I will give this album and 8 and keep an ear out for what these guys do in the future it doesn't need much fine tuning and certainly heading in the right direction already. It came out on Dias Records