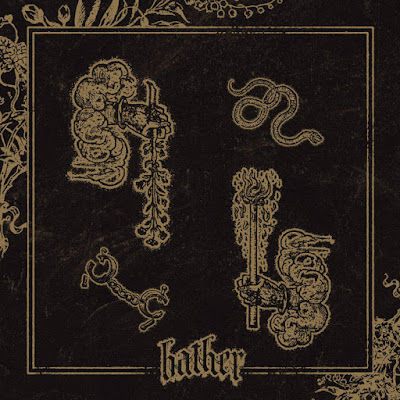 If we are getting picky about truth in advertising when it comes to sub-genres, I guess I like neo-crust more than crust in and of itself. This band is not pure crust as it is tempered with sludge.It does have a balance of raw attack and atmosphere guitars . This can create a creepy mood to provide a more bleak current to these songs. It is best realized on the opener so by the time we get to "Birds" it still is effective, it just has me hoping this is not the only secret weapon to their sonic arsenal. There is also more of a death metal feel that develops one you get further into the song. This death metal tones carries over to some extent into "All Dark Rooms" .

There is a commanding groove to "the Path". This sets straight what I have previous stated about extremely heavy music.It can often take your breath away when it first hits you with it's speed, density for feral nature. However this leaves more discerning listeners asking, ok that sounds good, but can you write a song. With these guys the answer is yes.  That is not to say this kind of nuance permeates all of their songs. They are sometimes content with just being heavy , but even on "Flesh Obsessor" there is till a touch of atmosphere , even if it finds them returning to a formula that has graced other songs.

The last song "Leaves Like Bones" is also the longest, but this is justified as the song actually goes some where and does not drone any more than the opening minute o guitar leading into it. Even then it is still under 6 minutes. It is this song that the Neurosis influence is most pronounced, Some of that is the lower rasp of the vocals. It also moves at a more lumbering sludge. This is pretty powerful in the way they locked into the chug. I will give this album a 9, as it is very dense and heavy, well done with taste and attention to serving the songs. If you like crust or sludge this is worth checking out. I am not sure how much air play this will get for me but it is certainly one of the sludge album of note so far this year.