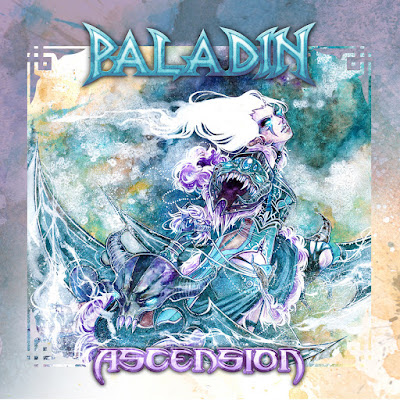 This "power metal"  band from Atlanta features on of the live guitarists from Arsis. There is a dominant thrash influence so they sound more like Helloween than say Iron Maiden. There is a little more hook in the riff to "Divine Providence". The vocals trade off from a harsher tone to the more power metal like yodelling. The songs do run together . Some are faster than others , but I find myself frequently having to refer back to the iTunes window so see what song we are on. The formula begins to become harsh vocals on the verse . Sung vocals on the chorus. They often opt for rapid speed with gratuitous double bass. Some times this comes across more like Anthrax than power metal. Some songs find the vocals taking a lower turn into  more of a death metal growl. If you are really into guitar solos then you will love this album as they pop up with no rhyme or reason other than to wank everywhere.

If you already grew up with bands like Flotsam & Jetsam or Sanctuary, then you have heard a great deal of this before. Though these guys are not as dark as either of those bands and are more interested in guitar harmonies. The need for speed begins to really make all of these songs sound the same by the time we get to "Black Omen". After taking a break from this album and coming back to it I find it less tedious. They pull from all the thrash and power metal tropes with little shame. A little over ten years ago we had another wave of this sort of thing with bands like 3 Inches of Blood who they are a great deal less gritty than, making a comparison to the band Cellador from Colorado a much more accurate representation to the sonic zip code these guys are content to shred in.

Are these guys skilled musicians ? Yes. Are they skilled songwriters ...well, if recycling stereotypes is your thing perhaps you will believe they are.  The deeper into this album I get the more my tolerance lowers, now I can only take 3 songs at a time. Dynamics are essential. Just think if every song Iron Maiden wrote was "Aces High".   What makes "Powerslave" great is while it is one of their more uptempo albums there is still a range of dynamics. Here we get barrages of double bass, though "Shoot For the Sun" is their version of "The Trooper" , just not as infectious .  The meat in the chug of "Vagrant" makes it more tolerable. Then it's back to thrash with "Dawn Of Rebirth" You probably guess that this is not dark enough for me, but power metal tends not to be , while thrash has more potential. They are good at playing this kind of music just not offering much in the way of originality. If you have never heard anything like this before then you are just to young because we have been here done that and gotten the bullet belt already, I will round this down to a 6.5. Which is still pretty generous considering how I endured this album more than I enjoyed, so that score is for people into this kind of thing.