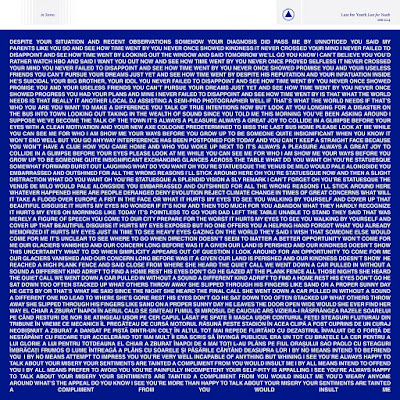 This band has been heading  in this direction for some time. Their new album just finds them arriving. The production sure helps. The last album was more lo-fi. There is a canopy of lush shadows providing the atmosphere. This is a kind of new wave that falls somewhere between Gary Numan and the Faint. The song writing is hooky, so it is not just that they capture the retro vibe of new wave and married it to the kind of indie rock the Faint evolved from. The guitar takes a back seat to the synths, but it is still there. Sometimes it just has a more Depeche Mode feel. The vocals are robotically dead pan. The effects on the give the vintage Gary Numan feel. Trace of a post -punk past can be felt on "Great Concerns " .

While the songs are dancey, they did not set out to write dance songs. Your coolest hipster dance night, would be wise to have the dj spinning this. The female vocals on "Fifth Terrace" really help to switch things up. It gives a hazy feel to what the do as the mood becomes more introspective than the previous song. "Adrift" is more up beat. It still has the detached coolness that marks new wave. The vocal melody moves differently than the previous songs. He is not really throwing his voice around, it is more a matter of using more spirited phrashing. "Imola" is more of an atmospheric interlude than an actual song. It doesn't really attempt o be a song until the last minute and a half.

"By No Means" is however a real song with some thump to it. It almost feels like this song is written closes to a dance song, yet the vocals have the 80s new wave thing going on with them. It is one of the album's strongest songs.  I will give this album a 9 and see how it sits with me over time.  This album comes out June