Deathspell Omega : " The Furnaces of Palingenesia" 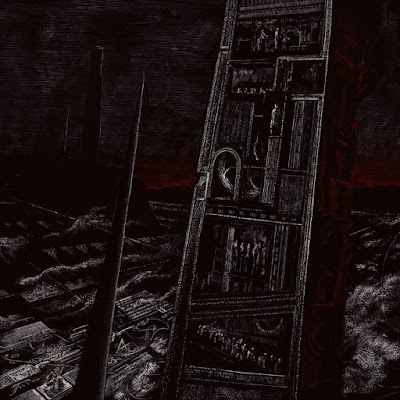 This French metal band needs little introduction. Serious as heart attacks my favorite album from these guys is 2010's "Paracletus" . This one is not as angular of a ride , but the darkness and dissonance is there. The delivery puts them closer to Ulcerate than Emperor. There is a more straight forward chug to the dense heaviness of " Ad Arma, Ad Arma". The vocals have a snarl to them. It weight they hit you with feels more like death metal than black metal. The atmosphere is not their for black metal. There is more of an explosive thrashing on "Splinters From Your Mothers Spine"> The lyrics I can make out are pretty mean spirited. So I am glad they are making metal hate again. This is not the only time they lock into a strong chugging groove.  Truth be told I would rather hear this from them than blast beats.

They do build up more of a chaotic momentum on this one. They are wise to back off and let the darkness simmer with " 1523" . It is beautifully creepy. The songs are pretty compact. They do not waste time droning. Most are under 5 minutes. The formula for the dynamics seems to be swirling shadows of chaos then lock into the chug. It works . "Standing on the Work of  Slaves" reminds me of old Samael. What strikes me the most are the songs where it is clear they have their own identity and are not content just wallowing in the same old writhing pulse most blackened death metal seems to carry. "Renegade Ashes" does have more of a black metal feel. The drumming is pretty crazy, but when you are this kind of band it has to be. Sung vocals float out of the craziness.

When they get overzealous and focused on heaviness for the sake of heaviness or jerk you around int too spastic of a manner they are not playing to their strengths , but even in these momentum the sound and the musicianship tend to make up for it. I think this album is more accessible to a wider metal audience. Not a mainstream one. There is a looser feel to the slower "You Can Not Even Find the Ruins" , which not only does the title sound like an HP Lovecraft story, but the music does as well. I will round this up to a 9, as the pervading darkness pushes it over the edge.