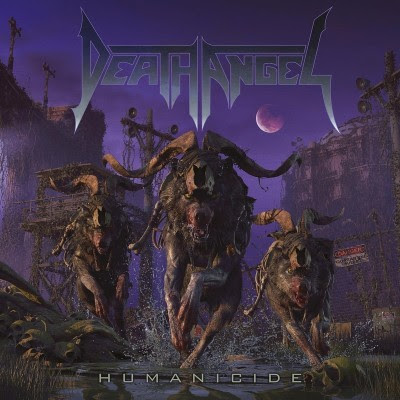 It was the fact that their 1988 album "Frolic Through the Park" found the band diverting from the thrash sound every open  else had already latched onto, that made me drawn to them. Since reforming I do not hear as much of that coming from them. Instead they are straight up thrash. The only problem that surfaces on the second song is this thrash sound they now embrace can be one dimensional. There is clean guitar going into "Aggressor" , but they launch themselves into another attack after this calm before the storm. I do like that Mark's vocals are more tattooist. Though he has not yet opened up and really sung yet. When it comes to thrash these guys do care about writing song and have the experience writing them.

It is not until "Immortal  Behated" that I get the singing I came for . This is tempered with the double bass aggression under hem, but a much better dynamic balance in place. It does not come across any less heavy with Mark singing .  Even the more melodic chorus on "Alive and  Screaming" is an improvement. " the Pack" also carries enough nuance so it is not one dimensional and has few hooks thrown in for good measure. "Ghost of Me" shows once more how the vocals locking in the hook of the riff is a winning formula. That said it is a mid paced song rather than a speed fest. It is even better when there is a groove like "Revelation Song" .Lyrically it is not the best, but the music makes up for it. "Of Rats and Men" doesn't not really hit the mark like the others. The lyrics are cumbersome. "The Day I Walked Away" finds them playing with different sounds and vocal approaches which is just what I need more of .

I will round this up to a 9. Sure there are only glimpses of the band I used to love, but they are good at what they do and have enough that is different still about them to tell it is Death Angel. They are not apologetic about being metal, so thrash fans who want song writing should check this album out.