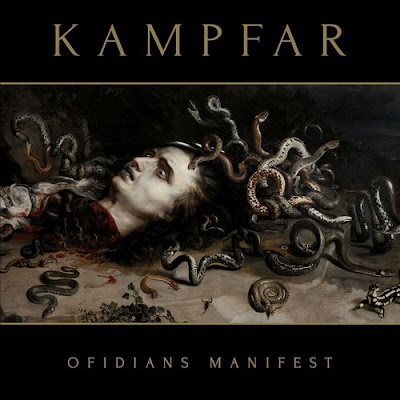 Do you need this band to be black metal ? Or have you accepted those days are pretty much , unless you count the few smattering the throw in like on the second song. The vocals are the most blackened thing about their sound now. It is an angry mid range rasp that has scathing scorn in it's snarl. I do like the grooves they stumble upon.  Is this darker and angrier than your average metal band? yes , things like the female vocals leading into "Dominans" is a nice touch. T`hey should opt for double bass over blast beats on a regular basis, not that there is a ton of blast beats on this album in the first place. I think their song writing benefits from the fact they have grown beyond the typical trappings of black metal. This is not to say that this album is really all that experimental. They just put some nice touches of atmosphere in the right spots.

We do get something more black metal on "Natt". I think the fact they use more chanted vocals on this song helps stay in their sound, with the song taking on more of a throb. This song also finds a heavy groove to work off of in the second half. This is so well done that even when they do give you flash backs of their black metal past, it's like why bother when what you were just doing was cool. "Eremitt" falls into more of a formulaic throb that it feels like we have already heard from them . There is piano line that breaks things up a little . They do flirt with black metal more than any other sub genre, though sometimes there is a death metal feel.

"Skamlos" is an uptempo straight ahead metal charge with no surprises. "Det Sorte' is darker and more melodic. It flows with more of a pulse than being driven by a gallop of chug alone. The vocals are a commanding bellow more than a growl, though not quite sung.  Overall this album is really well done, Kampfar wrote actual songs and did not drown you in the drone of blast beasts while creating a grim backdrop