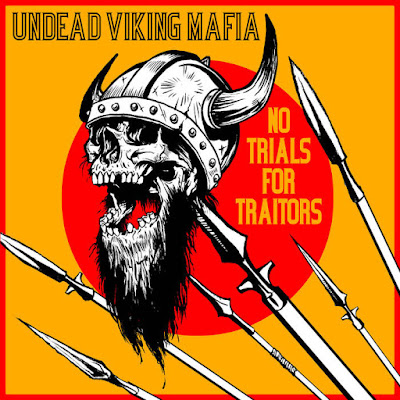 Not a silly as their name, this Atlanta plays a beefy hybrid mix of sludge and middle of the road death metal...think Amon Amarth without the epic galloping. The vocals are generally a sing song scream mixed with well produced death growls. Sure there is some Pantera influence mixed in these guys obviously picked up on "Far Beyond Driven" era. The vocals belt out more melody on the second song at the times it feels like early pre-prog Mastodon is being mixed with Devildriver or some other Velveeta dipped mall metal.  By the time we get to "Stones of Morax" I'm getting little bored with rambling through the backwoods until the song slows down. These riff begin to all conform to their corrosion to tightly you have to pull them apart with Crowbar. The "I'm Not a nihilist" chant in the chorus of the fourth song gives it some redeeming qualities.

They needed the banjo at the beginning of "the Cosair" to break things up with the more Clutch like groove the song goes into , which makes the fist song so far to resonate with me. This is a dynamic I doubt is being replicated live and song that grabs me is not enough for me to leave my couch to go find out. The fuzzed out bass opening "Hatfields and McCoys" gives away to more late 90s tinged metal. Most of this sort of thing came out of grunge and has seen another resurgence, but is High on Fire really treading any new ground either? The big chorus that swells up is the songs saving grace, a female voice is buried in the mix and loses the dynamic impact it should have had. The production is pretty good on this album until too many things are put on the table without room to breathe. "Downhill Blues" brings another death metal tinged boogie out. What does this one have that different from what we have already heard here? I waited until I was past the two minute mark to declare... nothing.

From what I remember from catching this band years ago is they are were more spastic and came out of left field in a manner owing more to power violence or grindcore, here they have clearly honed their song writing chops into something more polished, but pretty predictable. There is more rock n roll on "For Four" to create more of a Kvelertak feel. But I own Kvelertak's albums and will listen to them when I want to hear Kvelertak. In Atlanta much like every big city with an over flow of bands, has one of everything. It's almost like the city's geek culture convention Dragon-con, you can expect to see someone dressed up as every comic book character. Sure one guy might be Dr.Strange one day, then Nick Fury the next, then enter the costume contest as the Comedian, but you will have seen them all. The bands are like that these guys might be Atlanta's Kvelertak, or they might be their Devildriver, but I want to hear a band as themselves. I want to hear something new that is why I prowl the inner webs looking for new music.

The more nu-metal take on doom explored on "Doom's Year Eve" finds the band getting down and dirty into some nastier death metal, though the keyboards are so far back in the mix that any ambiance they are attempting to add is negligible. The riff on the closing song "Serpentborne" reminds me of the riff from "Abigail" that Mastodon ripped off on "Crack the Skye" so it's recycled recycling, but it's a cool riff to rip off if you are going to steal something. I'll give this album a 6.5, this is more polished than most Atlanta metal and the highest score I can give something that's not all that original, but if you are young enough then that might not matter much to you.