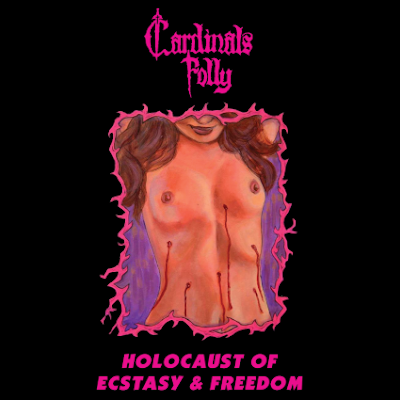 The oddest album intro I have heard in some time it sounds like some one is Chinese and playing the joke of peeing in your Coke.What could be the death blow to the album comes when their singer opens his mouth and utters some horribly flat attempt at singing that the rest of the band must be tone deaf to not hear. It's no wonder that this album is so under produced as the producer let this slide as well. It's almost more spoken than sung, so the fact there are not many notes to hit and they are still falling short makes things worse. The sour notes starts off the second song "Goats on the Left" . Growling would be a much better option for these guys and this is coming from a guy who  prefers clean singing to growling. The riffs in the more up tempo second song are a little better, but the vocals make then hard to bear. Is "Her Twins of Evil" about the power of boobs? The boobs on the album cover are not very impressive they are a little small for my tastes.  They are not the only band guilty of having their best riffs being direct rip offs of Sabbath, but the fact the horrid vocals give you no where else to hide makes it more glaring.

The vocals some how manage to but be as annoying on "Nocturnal Zeal" which is a slower, darker song that actually touches on doom with some conviction. The title track is not as fortunate. It speeds things up a bit, the over drive on the guitar fuzzes things out until the tone becomes flat. The vocals are not only out of key, but are placed awkwardly over the riffs. The guitar solo is the only redeeming thing about this song. The funny thing is their Bandcamp says have been laughing at stoner/ retro trends since 2007, but that trend started at least three years before that. The slower groove to "Pyschomania" is an improvement , but then they speed up into almost more of a gallop. I'm surprised Finland let this slip through the cracks as they are normally pretty consistent when it comes to metal over there as long a we are not talking about the Night Wish or H.I.M clones. The song continues to improvement as they slow into a more melodic section at the end.

The album thankfully comes to an end with "La Papesse" . Once again the band shows when they slow down and milk all of the gloom out of a riff that are on the right track. Then thing speed up into more of a rock shuffle and I find myself tuning the song out. I'll give this one a 3.5. The vocals really tank this album, hopefully it's a mistake this band can learn from and convince their singer he can't hold a note in a bucket and growling is his only option.