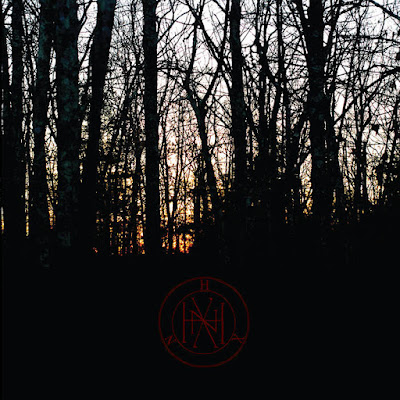 O.k here is some straight up black metal. What's going on in Rhode Island because shit is getting grim up there. It sounds like it was written in a shack out the in woods. Raw, but not to the point that it sounds like a bunch of metal trash cans are being tossed out into a storm. There is atmosphere to this and yes...it is pretty much a blast fest. These guys are from Rhode Island, but they don't like most American project and are more convincing in their blackness. That is the good news and the bad news as it also means they are sticking to the same worn out formula so many black metal bands who have come before them have trodden. The vocals sometimes drop into a lower death metal gurgle which gives as slight shade of their own to things. They almost lose me on the senseless blasting of the third song before slowing down to capture a more sinister mood.

They don't indulge in long drawn out blasting drones and keep things pretty too the point as that is very much how these songs are written to it would be blast beating a dead horse to do much more. Sure "Cryptic Fire" is brutal and if that is all you need from black metal then this might be your new favorite band. It begins to bore me and begins to become background music rather than capturing my attention. By the following song it doesn't matter if they are slowing down or speeding up tonally it's all beginning to sounds the same. The more black n roll drum beat does offer a little hope and the guitar finds a dreary melody to layer things with. The vocals even taken on a cleaner moan before the bast beats blitz any cool creative thoughts that were developing out of the water.

It takes the dark and dismal riff of the depressive "Abismo" to get my attention and I find myself asking why haven't they been doing this the whole time.The guitars are capable of playing actual melodies.There is a more bestial roar to "Kvnnt". While powerful it doesn't offer much in the way for song writing aside offering a more death metal shade to what this project does. There is more thought to the songwriting of "Apparitions". It may not be as dense as the previous song, but this allows something closer to a real song to form.Not the album's most dynamic moment, but in light of the song that came before it there's improvement, yet not what the band showed they are capable of delivering earlier. When the bass stops to rumble by itself, it's too little too late as I am not sure what they point of that was. The atmosphere and melancholy sense of melody that I want from this project returns on "Ceremonial Wounds, though this is not nurtured as they explode into a more wrathful temper tantrum. The last song kind falls flat for me to as it rushes by with little in the way of texture.I'll give this one a 7 it has some cool moments just loses some consistency in the second act.