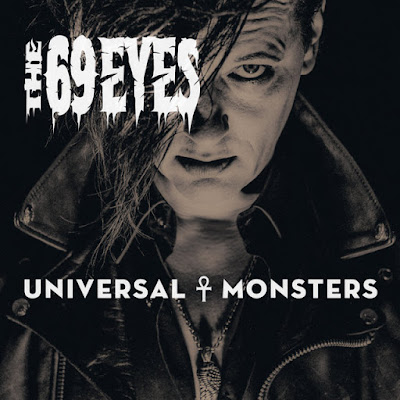 I grew up on hair metal and love goth so I am not sure why these guys never caught my ear. I was exposed to them by friends and girl friends, but there singer seemed a little weak. Why I am giving them a shot now, well I guess so people like you will click on this review and give it a read. I had to listen to the opener twice before I really paid attention to it. While the singer's voice recalls Iggy Pop on "Jet Fighter Plane" which was the first single from this album. It also sound more like Pop than the Sisters of Mercy they are going for. I think "Jet Fighter Plane" would have been a smarter opener, the guitar solo has more of a Steve Stevens fire to it. "Dolce Vita" didn't do much for me. Any hair metal band thinking about putting out an album needs to consider the dude who produced this record. He gets the arena rock sound, but with a darker grit to it that knocks some of the cheese off the top.

"Black Bird Pie" has more a Cult vibe, though when it gets to the chorus I feel like Iggy Pop is covering "Cherry Pie".  They are much less goth-metal than I remember and going for almost Rolling Stones like rock n roll here. The Iggy thing is still out of hand and the funny thing is it's Iggy Birthday as I am writing this, didn't realize it fell so close to Robert Smith's birthday until today. That's is actually the most goth fact about this review. I am beginning to wonder why this album is call Universal Monsters. For a song called "Lady Darkness" it sure is happy. The "TV Eye" rip off  "Miss Pastis" has it's moments, like the more melodic section leading into the guitar solo. They get a little darker, but sounds like Iggy Pop with Alice Cooper's backing band from the 80's on "Shallow Graves".  I like the more electronic element to "Jerusalem" even though the lyrics are really dumb. They song loses it's punch at the chorus for sure , but the verses are alright.


I'll assume the song called "Stiv and Johnny" is referring to Stiv Bator and Johnny Thunders. It has the singer digging down into more of a Fields of the Nephilim like croon with more sand papered edge. It's one of his better performances on this album, making it one of the rare songs I really like on this album. They stumbled over some long lost Billy Idol b-sides starting with "Never". The guitar playing on this one is better than average, but yet another stupid chorus. These guys need a Desmond Child to stop giving their love of music a bad name. You might think this album would be weighed down with power ballads, but aside from less dynamic vocals this is what separates these guys from H.I.M, "Blue" does come pretty close to being one. The close this with another "Cult " moment with "Rock N Roll Junkie". Lyrical 'your just a rock n roll junkie, and every guy surrounds you like a monkey" has to be the worst lyrics of the year so far. I have to round this one down to a 6 and suggest the last Iggy Pop album or the new Cult over this, but it's not terrible despite some of the lyrics.