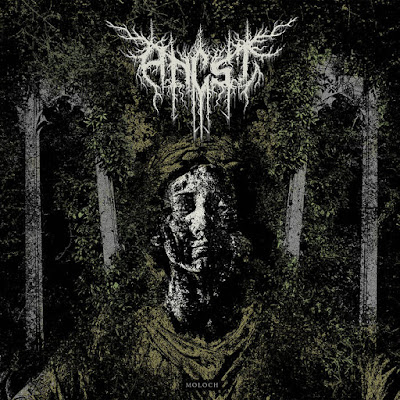 These guys have been pegged with a few different sub-genres, but I'll make it really easy for you they are blackened Hardcore. From what I have read about them they are "anti" all types of stuff and while I can agree with the anti-religion some of it is a little too far to the left for my tastes, but all of this is screamed at you in a way that they might as well be ordering from the McDonalds drive thru menu, though they are most likely vegan, so perhaps this is why they are so angry. Originality is not one of their virtues. The album sounds good and the first two songs work well, but the third song bleeds out from the second and the album begins to become a blur that is less engaging. The vocals never change from their screamed shout and are the leading element to their mono-chrome sound . They really begin to bore me by the time we are at "In Decline" and I find myself wondering "how am I going get through this album?"

They get moodier on "Strife" which helps break things up, but midway into the song they speed things back up. They still manage to drape things is a dissonant shadow and give it a little personality.  They go for a more to the point blast fest on "Devouring Glass" that brings their more hard core side roaring out a little louder. Their drummer is the most bad ass of the bunch and this song hammers that point home. They stay on this same blistering path for "Turning Point", but for me having two songs like this makes this one loose it's impact. They do let up and perhaps a band that just goes for the throat all the time is what you look for in music as you needs for dynamic stimulus are very low. If this is the case you will be more impressed with this than I am. Closing in on the two minute mark the guitar on "Human Hive" gives you a little melodic breather.The vocals change a half shade to get into a lower death metal grow in an accent here and there, but it's one of the few variations I have heard.

"No More Words" comes across like a shade of blackened death metal is adding here but it's just a bash. If you have not had your ear blast beaten to the point of sonic numbness here then this might give you a slight urge to head bang. The final song doesn't really do much to add dynamics or give you anything you have not already heard them do on the songs that preceded it. They do it will, but it feels like a one trick pony at this point. I'll give this album a 6 as it's well crafted, though the song writing seems to be throwing the next heaviest choice at you rather than sharing any feelings aside from anger.