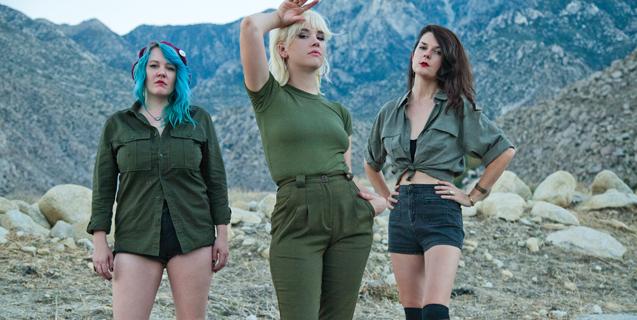 The slicker poppier approach benefits this California band, the drive is still intact. The girl group sound mets the 80's rock of the Sunset Strip. The vocals are relaxed as the drums drive the band at more of a punk pace. This album has more sonic depth and puts them ahead of their garage band peers. Energetically they have some common ground with the Runaways, but without the early 70s glam feel. When they do step back into their yesterday for "Sleepwalking" to engage in something more punk, you realize just how much of an improvement the first two songs were. Lyrically "Wednesday Melody" has some Joan Jett to it, mixed with a more bubble approach to hair metal, that often found it self clashing with Punk in bands like Faster Pussycat.

The pop punk swagger, touches on the pop influence from the 50's that the Ramones carried rather than anything like Fall Out Boy.  The album's strength lies in when the instrumentation has the punk attitude without cramping the vocals. The songs are narratives on the party life of West Hollywood's legendary rock scene that still finds band's trying to chase the ghosts of Motley Crue. These girls might have more of dark side than say the Donna's they are more thoughtful than just getting wasted and throwing their t.v. out of the hotel window. The anthem "Sour Candy" is up beat to the point that it's "Leader of the Pack" like vibe might normally be too happy for me , but some how it all clicks into place here. The synths on this album provide a cool atmosphere to the album that also gives it more of an 80's sheen, but think more along the lines of the Cars in this regard. I like how things get a few shades dirtier on "Desolate Town". Not quite to a junkie stripper Courtney Love of a train wreck way, but in a similar zip code.

There is more of groove to "I'm All Over the Place". This allows for the vocals to have plenty of room to flex what comes down more to attitude than pipes. Here it gives them almost more of a Bangles vibe in the exotic way this song pulses. The album closes with "Hollywood, We Did it All Wrong". It returns them back to the early rock n roll street corners mixed with the weird place punk found itself in the 80s when new wave hit, so perhaps it's touches of Debbie Harry. I'll round this up to a 9 and give it time to grow on me.  While it might be too happy to get a ton of rotation on my end with the summer almost on us , if you are just looking for something fun then this might be the ride you are looking for.