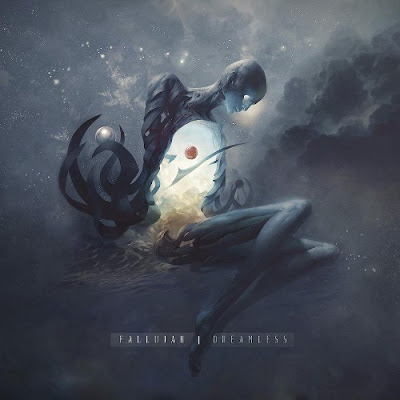 Here is the follow up to 2014's "The Flesh Prevails". While these guys are technical death metal, they pull it off in such a way that doesn't just come across as dazzling you with chops but create an atmosphere. The first song seems like a movement more than a song on it's own even though I like the fact the carries more ambiance than anything I remember from the first album. "Adrenaline" ebbs down into an almost jazzy landscape, but caters more to fans of death metal as it is about the propulsion. The vocals are forceful growls on the lower side of mid range. A more progressive color is added that creates a more Dream Theater like feel before they blast off into the more rapid fire attack. The drummer is really killing it coming off of fills into punching grooves. The bass player is not too far behind him in terms of prowess. The shredding solos of course reach out and grab, but it's the other textures like the female vocals of Tori Letzer, tossed into this one that make a difference.

These guys prove you can throw a lot into the mix without having to drag it out into ten minute songs. "Abandon" doesn't pull me in as much as the previous songs, but highlights the fact that these guys don't come at out you with the conventions of modern metal in the most expected ways. The female vocals also return for this song. They do flirt with some of the more conventional elements of prog metal, bands like Cynic will come to mind. The very mathy grooves that dance around your head rather than hitting you straight on. At this point if you haven't noticed the drummers feet you will as his double bass is beyond sick. The title track is the most melodic moment so far, it is almost an instrumental with the female vocals haunting it from the corners of the song. Lighter in atmosphere the drummer still keeps things moving. They get more hammering on "the Prodigal Son" it does lose me a little in the same places metal that is heavy on technique does. By offsetting the heaviness with the ambition invested in it. There is almost a more black metal feel to the beginning for "Amber Gaze" , perhaps if it was droned through a quantum hyper-cube. When the song gets to more of a roar than it's clearly death metal. If you are meat and potatoes metal head that doesn't like chugging more artful than Deicide then this might not be the band for you.

"Fidelio" is more of an atmospheric interlude than a free standing song. It feels like this interlude is going to lead into a build up more intense, then comes another fake out in the form of "Wind For Wings" which takes it's time getting wound up with a Tool like tension. When it kicks in it feels like marginally heavier Dream Theater with growled vocals instead of the Journey like warbling. The break for the guitar solo gives way to the first clean male vocals on the album. The sound of robots on acid is captured at the onset of "Les Silences" . The use of electronics lives up to the title progressive and takes their sound some where they have not gone before. This instrumental's only voice is an undercurrent of samples, it might not be metal, but it is good music. Did not expect to hear anything like that going into this album. If this was the first song I heard I would click back to make sure I was listening to the right album.So this puts the pressure on "Lacuna" to end the album on a heavy note. By this time death metal is another color being added to their sound than the totality of it. The prog acrobatics confirm this, before they do get down into some growling. I'll give this one a 9.5, I am not sure how much play I will get out of it, but it's hard to ignore what an achievement this album is and the growth it reflects on the band.