A Dead Forest Index : "All That Drifts From a Summit Down" 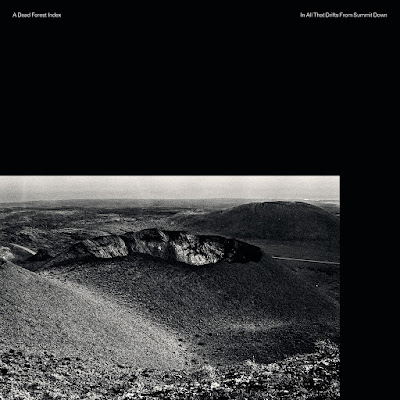 Of course we are going to check out the band that is touring with Chelsea Wolfe. This duo keeps things dark and simple. The vocals are generally androgynous, giving these guys a much different sound than if they were just another band of Ian Curtis impersonators. The music drifts by you with the slow melancholy pulse similar to Chelsea Wolfe's earlier work hovers like a rain cloud over it.Both bleak and graceful, it often defies genres, sure indie rock is the broadest genre, there are more folk and western influences hinted at than writing these guys off as being post-punk. Slow-core bands like Low certainly would be a reference along with the likes of Sun Kil Moon to some extent in the lethargy that lingers it the heart beat of these songs. Some of the mesmerism lifts on "Cast of Lines" which doesn't feel as depressively taunt and works more off the layers of harmonies which might be impressive, but do not embrace the guitar as tightly nor give the song the same sense of movement. "Ringing Sidereal" is more minimal with the  haunting vocals well layered , this could be played in a more reflective scene of a David Lynch movie.

There is heavier feel to "In Greyness the Water" thanks to the more  foreboding accents of the drums. They roll around the vocals, creating pressure and tension without doing the typical post-rock build. The chant like melodies give a more droning sway to the song. Sometimes they are minimal to the point on songs like "Sliver Thread of the Sun" that is more of a breeze blowing by than a tangible song. This is given a contrast with the almost poppy "Myth Retraced" that reminds me of Coldplay.But this has enough shadow cast on it to win me over where Coldplay falls flat on me. Another more mainstream artist comes to mind on "Sand Verse" , the Shins...in how the melody coasts over the guitar, Though it could be just as easily reasoned that this comes from an  Elliot Smith influence. For the bulk of the album the vocals do most of the heavy lifting when it comes to keeping the songs together and this is really exaggerated on the folk balladic tone of "Upon Dark Hills". Here the vocals just sit atop a drone. The album closes with "Homage Old" in a fitting fashion for the singer's voice lifts the song as it soars upward with more power behind it to prove that while he has sung in a hushed tone for most of the album he has pipes to use if he so chooses.

It will be interesting to hear what this sound like on a rock stage at full volume. I'll give this one an 8.5 and see how it grows on me, I am sure seeing these songs live will help further sway my opinion, I liked the mood the songs create even though at times some of the songs were almost too minimalist for my tastes. I would not be quick to peg this as goth, sure it's on the darker side of indie rock, but it often feels more like folk to me, and I'm not talking about Death In June either.

Email ThisBlogThis!Share to TwitterShare to FacebookShare to Pinterest
Labels: "All That Drifts From a Summit Down", A Dead Forest Index, album review, dark indie rock, indie rock, neo folk