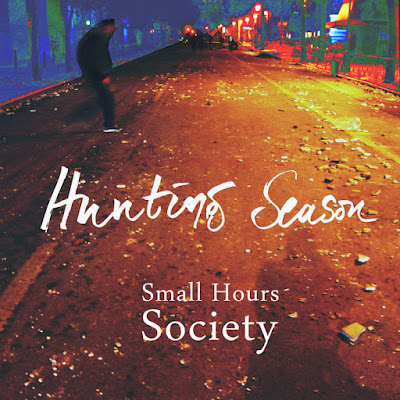 When I think of Greece this is not the kind of music that comes to mind. Granted Rotting Christ was the first band I thought of when it comes to music being exported from there. But they do have other music aside from metal, This band for one who sounds like if the Verve were desperate drug addled depraved cretins then they might be able to make something that sounds like this band. These guys might be upstanding citizens, but that would smash my rock n roll fantasies that needs might rock stars on the brink of death and the edge of a dirty needle. "Black to the Core" is punchy rock with punk leanings, it doesn't have the same heart of darkness the first song had but isn't bad. The vocals shift in 'the Captive" carries a more taunting monotone with a shade of post- punk to it.The guitars pick up the slack and are willing to slam on some sonic dissonance in a second. There is more of a slinky Morphine like groove to "bossa".

"no relapse" rang it's drone below my radar on the first listen and had to be revisited. Like most of their songs finds a release for the tension, here is a building jangle. The vocals don't demand to become the focal point and work more like some of the more punk influence moments of 90s alternative. There is the kind of  hypnotic pull to "river" that I am always hunting for in music. it lulls you in but still has ample balls to it. If Sonic Youth and Wovenhand somehow managed to get the guys in Fugzai high and convince them to star playing again the results might be similar to 'second hunting" , so in other words pretty fucking awesome. I think fans of the Afghan Wigs will also find common ground with this band. There is more of a brooding indie rock vibe to the anger underlying "the Dare". Some of the iconic sounds from the early 90's noise punk can also be found here, though noise takes a back seat to groove in this urgent narrative.

There is more of a rock energy to the more upbeat "sour water". This doesn't mean they forsake their tendency to drone. It's explosive with the shadows of their demons haunting it. I would not at any point reference these guys as being shoe-gaze, nor would I say they are grunge , but the influence of the two genres touches on some of the attitudes found in the music they are making. I would not call "control" a ballad, but it has a less aggressive strum to it than the bulk of the album, yet has a folk punk drive. Overall genres be damned this album is a lot of fun and might make you remember what was so fun about the explosion of alternative music in the 90s without insulting your intelligence. I'll round it up to a 9.5.