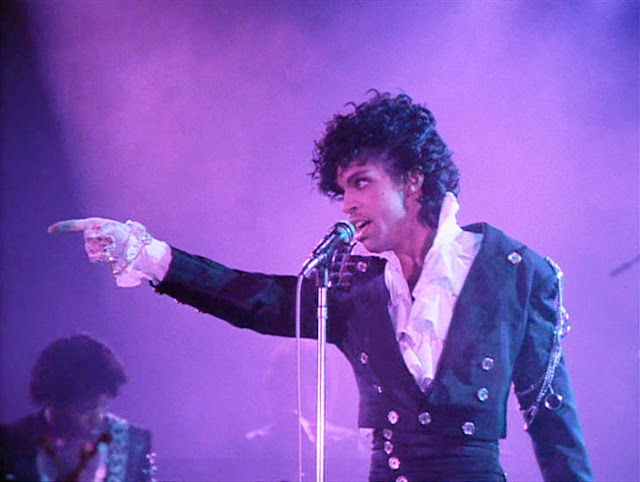 Up until Christmas of 1984 the only albums I owned were Kiss, Ozzy, Alice Cooper and Twisted Sister, the first album that I owned which was not metal...yes even before Bowie for me was Prince's "Purple Rain". While this doesn't hit me as hard as Bowie, since "Crystal Ball" was the last Prince album I was really spell bound by I still caught him a couple of times in concert and continued to be one of the best if not the best guitarist I have seen live. Rather than rattling on about what he did for music or who he was I'll let his music do the talking and give you my top ten Prince Songs. Given the Purple One's rigid control of his songs, in some cases the original versions of these songs could not always be captured, so we are going for covers in some cases.

10- Something in the Water Does Not Compute

Off "1999" in any arrangement this song works, though the new wave funk of the album version is always the best in my book.
9-"Thieves in the Temple"

The vocals and the groove are what push this to the top of the heap. The beat is pretty heavy. This was when he started getting into more conventional pop ad became less guitar oriented. 8-Raspberry Beret

Around the World in a Day was heralded as his Sgt.Peppers as the follow up to Purple Rain the bar could not be any higher. Lighter in tone than "Purple Rain" it sounds a little dated, it's impossible for me not to get this one stuck in my head when I hear it, as it stuck with me over the years.

One of his more straight up rock n roll songs, he was one of the few soul/funk artists who could convincingly cross over into rock and really rock.

Sure "Nothing Compares 2 U" could easily be on this list, but lets face even the songs Prince wrote for other people be it Joan Osborne, Kate Bush, TLC or Sinead O' Conner feel like Prince covers because they have his finger prints all over them and when he decided to play them after the fact they became Prince songs.


The best song off of "Lovesexy", this live version finds him really killing it and showcases his under rated guitar playing that all of you mother humpers are now on Facebook saying you have always been a fan of since he died.

> 2- If I Was Your Girlfriend Androgyny was his thing as much as it was Bowie's and that fact wasn't conveyed any more convincingly than on this song, which is another example of his immaculate song writing.

Androgyny was his thing as much as it was Bowie's and that fact wasn't conveyed any more convincingly than on this song, which is another example of his immaculate song writing.While the cover below carries strong elements of the original these girls can't capture Prince's raw sex magick that oozes from his voice.

It might seem cliche that number one is off Purple Rain, but that album is in my top 10 albums of all time and while the bulk of his work is strong up until he started bat-dancing, "Purple Rain" can't be touched. This song is what first caught my attention and has everything I could want from him from the wildly passionate guitar playing to his falsetto.
Posted by Wilcifer at 1:29 PM