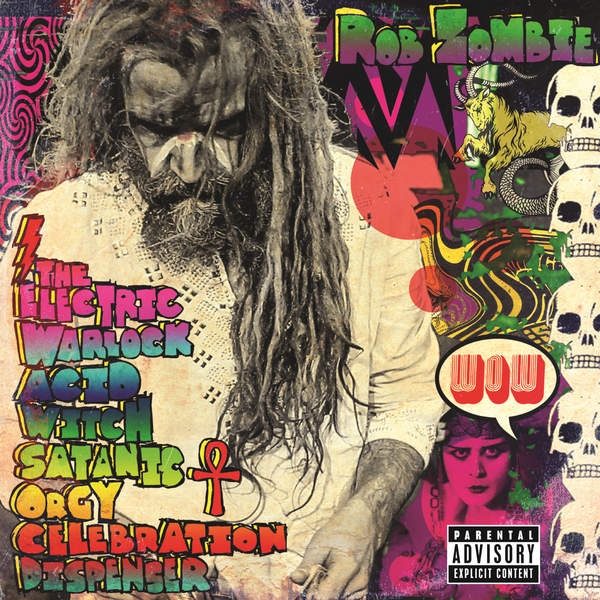 I love me some White Zombie, I was on for the ride the more Stooges like "Make them Die Slowly" so when "La Sexcisto" came out I was confused as to why they sounded like Metallica. The band hit their stride during the peak of my drug summer when "Astro-Creep" came out. I have caught Rob a few times live since the band broke up, but never caught on with his solo work cus I wanted White Zombie, the last of the Demons Defeated "Satanic Cyanide/ the Killer Rocks On" slows down and has more rock to it than the more electronic thump I associate with his solo work. "Well Every Body's Fucking In U.F.O" owes it country twang infused industrial to Ministry. Once you get past this fact it's fun a Butthole Surfers kind of way. The song titles are all way too long.The album has more textures and musical components in play than I would have thought going into it with several interludes.


"The Hideous Exhibitions of A Dedicated Gore Whore" has a sixties organ riff that accents the song, lyrically it's kind of stupid pretty much just describing her tattoos. The samples on this album are one of it's strong points in adding to the Narrative that Zombie sometimes reverts to a middle school level. There is a more White Zombie feel to 'Medication for the Melancholy". The album gets heavier here and stays strong on "In the Age of the Consegrated Vampire We All Get High". the interlude entitled "Super Doom -Hex Gloom" has more prominent psychedelic touches though they have been creeping around the entire album. The go for a more straight up rock kick on "In the Bone Pile". This also finds Zombie coming closer to singing than his chanted rap style."Get Your Boots On" is a more dialed approach that colors in the numbers to his typical formula.


This album is a tons of fun. The songs are mostly under three minutes and ride the grooves with some window dressing, but adhere to the Kiss school of song writing by keeping it simple stupid. The last song breaks from this trend and breaks the five minute mark, it's heavier and more experimental than the joy ride you have been on for the rest of the album. Not sure if this is going to be the soundtrack for the "31" movie he has coming out. Either way it's fun and gave me more than I was expecting from him I'll give it a 9.5. so don't let the fact that at 51 Zombie looks like Gandalf fool you as he still has it .