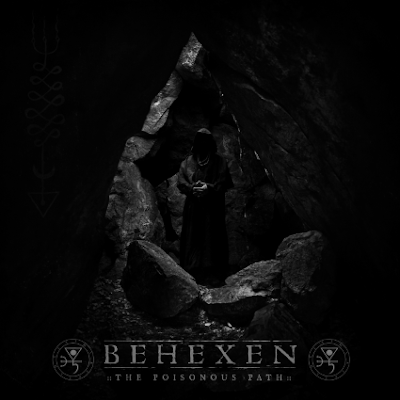 These guys are the real deal when it comes to Finnish black metal or any black metal for that matter. The album hits you with a dark blast that blurred past me and it wasn't until the second song that I really began to tune into this. They have been around since 96 and have ties to most notably Sargeist, who almost all of the members have played in but also bands like Horna, Nightbringer and Kult ov Azazel. They seem to prefer playing at the more thrashing speed of "Cave of the Dark Dreams" which also finds them conforming more closely to the sound brandished by a hundred other black metal bands. They come across as being heavier on the more deliberate " A Sword of Promethean Fire". The vocals are a lower more death metal rasp. They tune lower than your average black metal band so this is fitting. Two minutes in they erupt into blasting and lose this groove. The gang like chant that chimes in add a cool snarl to the song. They keep up the pace for "Umbra Luciferi". Its dense and dark with the cavernous boom of death metal, but relies on sheer heaviness alone.

The album continues to race and ramble down the same left hand path it began on with monochrome shades of leather. There are some punches and accents that stand out more than others. The chorus on some songs are more defined than others. If you have ever complained about Watain being too melodic or not cvlt enough for you then this should not overwhelm you. That is not to say they do not develop any melodic tendencies as they do occur in an atmospheric context.They care more about speed, but are capable of chasing that dragon without resorting soley to blast beats. The beatings continue until morale is improved "Chalice of Abysmal Water" only flirting with the darker melodic black metal chord voicing. They continue to dig deeper into the more musical abyss on "Pentagram of the Black Earth".  They throw this to the hot winds of the underworld on "Gallows of Inversion" which is more of a blast fest. It is more along the blackened death metal side of black metal to me, but these guys came to be at a time when those lines were not fully drawn. By the time we get to the last song it's understood that these guys are good at what they do, but I'm lost as to who they are with their own original sound, however it's as good as color by numbers black metal gets so I'll give it a 6.5.
Posted by Wilcifer at 10:59 AM