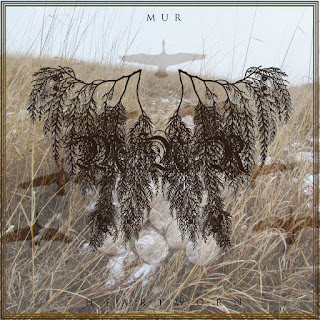 This album is an oddity. Slow depressing doom with interesting almost lo-fi production and guitar tones that avoid the ringing feed back most bands in the genre rely on as their life blood. The clean tones are fragile and almost indie rock sounding. This was not made from a stead diet of Evoken that's for sure. This is a one man band and the dude is pretty versatile as he goes from neo-folk to a more blackened take that opens the third song by sounding like this is the Strokes take on black metal. The sometimes fuzzy production could stand to be a little smoother here as jumbles the sound around some guitar melodies that are unique to the genre. "Migration Incantation" speeds up into a more punk flavored ball of punchy propulsion. Vocally it's more black metal than not. A few moments where the distortion on the recording obscures the song a little. The production is really a catch 22 here as it gives this album much of its personality, but hampers some of the guitar melodies which also give the songs a fresh perspective of where metal meets indie rock.

"Wyeth Shroud" finds the album going back down into a doomier place, before being blasted back off into black metal. The blast beats are not handled in the traditional way, nor is there tremolo picked guitar riding it. It does move trough several moods, which does more justice to black metal than the genre has heard in the past few weeks at least. There is more of a depressive black metal mood looming around the corners of "Snakeskin on the Lake". The screams come in over the clang of clean guitars and are as convincing as if it had been blast beats. This project gets a lot of credit for not taking the most obvious roads. "Limbless Frozen Monarch" continues the cleaner tones established in the previous songs and gets even more delicate with them. The song climaxes in the unexpected manner of the song twisting into funeral doom.

The last song finds it gracefully going into black metal. The song dives into a clean indie rock part that sounds like it very well be a Sun Kil Moon song. I'll give this album a 8.5, I'm unsure how much additional play this will get as the production is a little rough, but if you are looking for unique black metal and tired on the same old same old blast beaten path, then this is highly recommended.