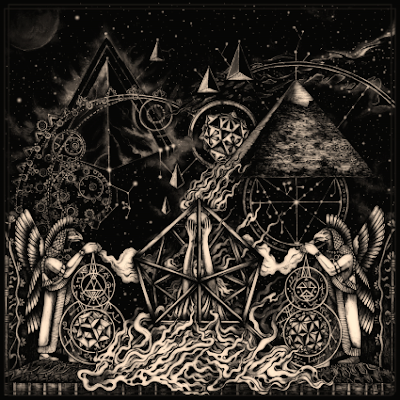 This Finnish band goes at it more like a French band making me take a note to myself that when a band's p/r write up says they are totally unique that means they sound like a cross between Emperor and Deathspell Omega. The vocals are that choked lower King Diamond whisper. Credit where credit is due it's not your typical blackened death metal. The album's production is not as dense. The guitars might be layered, but not so heavily that they dominate everything. In weird time signatures and Urfaust like bellowing it's not like the hundreds of blast beat heavy bands I sort through in my in-box everyday. There are even more shouted vocals tossed in amid the lower growls. The sense of riffing is pretty crazy so while they are not totally re-inventing the wheel, they taking it for their own spin here. I also like the fact the song are fairly compact and not all sprawling ten minute epics. Though midway into "Orgone" there is a sense that are joining the lost common denominator of heavy with some of the death growls locked on the chugs.

There is more dissonance in the declaration "the Daughters of Fire", which finds them resisting the urge to become just another death metal band. I can appreciate the drummer's restraint and the way the riff pulses and throbs rather than throwing themselves into the full frontal assault. The soprano vocals wail away in the background as it begins to speed up. The chanted vocals are all over the place and things are generally chaotic. The closing hymn the " Rites of Sacred Ecstasy" finds strange tendencies questioning song writing choices as the song's more powerful moments find everything joining in a staccato chant then dissolving into something more formless.

This is an interesting album, they get a great deal of credit for bucking the norm when it comes to heavy. Keen ears can go under the surface to hear the influences I think they have adding enough of their own touch to this sound. I'll give it an 8. It's worth a listen if you like progressive black or death metal and prefer it darker and dissonant.
Posted by Wilcifer at 8:06 AM