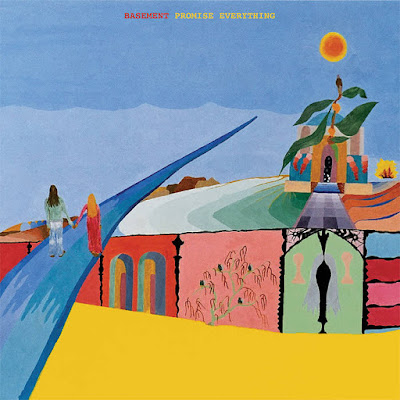 Here's a band that walks the line between the grunge of the 90's and indie. There were band's like Sebadoh who were walking that line back in the day and these guys have smoothed some of their awkward edges out to give a slight emo pop sheen to this. The hook in the chorus of "Hanging Around" waves its hands for attention in a more obvious manner than the casual cool of the opener. They reclaim some slacker ambivalence on "Lose Your Grip", however they already set the bar pretty high for themselves on the first song so that is what I am asking them to aim for. Though there is more of an emo introspection on "Aquasun". I think it's the first song that comes close to being as well crafted as the opener. The wall of jangling guitar over powers the drums on this one, but it's alright. They step up their rock game on "Submission". It's pretty simple stuff, but played with just the right energy and conviction.  The singer lets his voice crack to emote more, which is there version of a more aggressive singing style.

They take their foot off the monitor and stare at their Converse on " Oversized".  It gets sugary in a way that sounds like it's a lost Weezer track. "Blinded Bye" is where they started to lose me , which is unfortunate because they do have a lot of potential. But the song was just bland and too middle of the road for me. This is the same quality I don't like about the Foo-Fighters as well. To this band's credit they don't write songs that sound like beer commercials. They gain some traction on "For You the Moon". The guitar riffs feel like they are more thought out than the vocals, but the song has enough momentum to gloss over that. The add a stiffer kick to their brand of emo rock on the title track. The bass is more driving on this one and eventually allows the guitar some room to play around. They dial it back a little for "Halo". It glides along the more emo power ballad landscape that makes this feel like 2002. There ends up being more ballad and less power to this one. These guys are good at what they do, I would like to hear them head in the direction this album started out on , but regardless I'll give this album an 8 as they achieved what they set out to here.