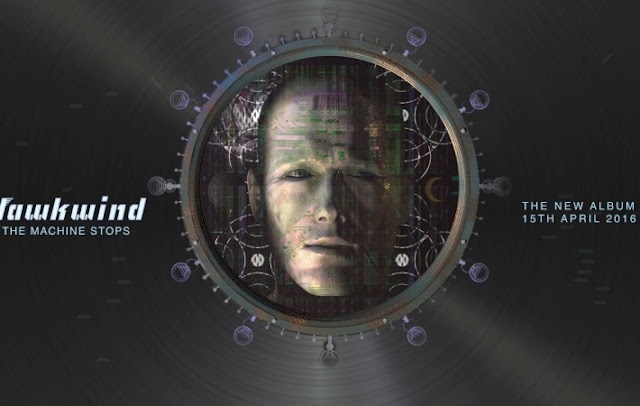 Here's a rule... if you are going to throw around a band's name when it comes to influencing other artists you like , then you must review their albums when they are released or you are very simply a poseur. You don't have to like it. As not all band's can keep up the kind of streak that the likes of Bowie and Zappa had. Things have changed since their days Lemmy was in the band. The sci-fi element was not toned down, instead it was allowed to run wild. If you do drugs and are not doing them when you listen to this album, that needs to change. This concept album is based on the Em Forster book of the same name .The first actual space rock goes down on the second song "the Machine". At it's core the band's sound has retained it's roots and there is not threat of them isolating the cult following they have garnered over the years.

Of course Dave Brock is setting the controls for the heart of the sun on "King of the World" , the only other original member along for this rocket ride is Tim Blake, who also played in Gong. From the Nik Turner camp Dead Fred is aboard with violin in tow. "In My Room" is not a Beach Boys cover , but a song that starts off as whirling psyche rock before turning into rain sound effects. One of the more bizarre turns I have ever heard a song take. The song that it wanted to be certainly sounded pretty cool. "Thursday" wants to have a harder rocking to it's siren drone. If you think your indie rock band is "psyche" then you need to check your self and listen to this album because these drug sniffing dogs still have it. I can tell midway into this album it's blowing the last Pink Floyd out of the water even with half the production value. The brighter more upbeat vibe the beginning of "Synchronized Blue" goes for is not my favorite sound from them, but they do make an attempt to rock it a little harder, to the point of touching upon metal. They even get proggy and go off on a meandering keyboard solo.

Space rock might be the crown they wear, but it doesn't stop them from dipping into almost trip hop like beats on the more subdued"Hexagone" that finds the vocals tip toeing around a 60's mod melody that would go well with a cup of tea. Cosmic synths set the stage for "Living on Earth" that has one of the album's more interesting vocal melodies". The keyboards wander around over this song , but some how they jammy quality that it floats on makes it work. Jamming is what goes down particularly after the break at the four minute mark. They glide around the bubbly yet exotic path of the Milky Way on " the Harmonic Hall". This finds the band stepping even deeper into electronica. This song is more of an instrumental, with the breathy chanted vocals sounding more like another sampled layer.

They return to more straight up rock on "A Solitary Man". This song brings the band back down to earth, and perhaps too much so. It's not a bad song, it doesn't seem to play to the band's strengths. They do however shine on like the crazy diamonds they are with the up tempo dream bath of "Tube". This opus comes to a close with "Lost in Science" . It sounds like droids are robbing a bank before the band goes into their legendary brand of space punk. I'm not sure how much air play this will get from me since I no longer drop acid ...or do any drugs, but if I am going to relapse on the more mind expansive drugs then this would be on tap. I really like how they maintained their sense of identity while dabbling in newer sounds. I'll give this one a 10.