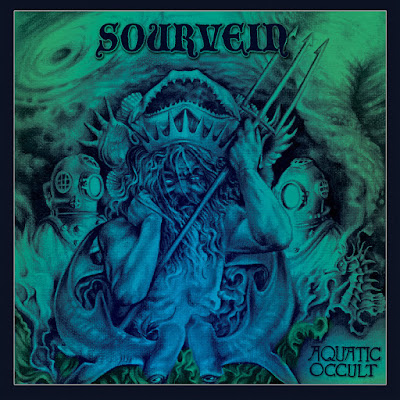 My only history with this band is the split they did with Graves at Sea. I'm  much more impressed with this album. "Avian" is the first song that feels like they are taking the plunge into the album with "Tempest" feeling more like an intro. Though most of the songs just break the two minute mark. This is a relief and proves that in order to play doom effectively you don't have to open the flood gates to ponderous ten minute plus behemoths. The fact that two members of this band were also a part of Buzz-Oven can be felt on the oppressive stomp to "Ocypuss".  "Aquanaut"  provides are more traditional doom counter point to this beating previously rained down upon your ears. "Hymn to Poseidon" has the melody submerged beneath the tides of distortion. "Mermaids" swims in more stoner rock waters not unlike those that older Queens of the Stoneages once bathed in. They attack "Urchins" like sharks with the scent of blood. This song's doom tendencies keep the bongs bubbling with the same intensity of Electric Wizard.

When T-Roy sings in his more raspy plea that involves more actual notes and less growling he taps into some honest desperation on songs like "In the Wind". They ebb down into the much calmer flow of  the interlude entitled "Cape Fearian". There is more of an undulating to the more conventional grunge groove of "Capsized". The way the vocals are delivered remind me a little of Today is the Day, T-Roy does sing a little more on this one. The undertow of "High Tide" pulls you down into murkier depths. The song is not as fully formed in it's sluggish tug. The babbling brook of bass that runs under the garbled vocals and wandering guitar solo, create a “Planet Caravan” like vibe, but this feels more like a free floating idea rather than some solidified in an actual song, so I write it off as an interlude.
The stormy churn of "Coral Bones" find the band sailing along the coast of Electric Wizard. "Oceanic Procession" finds the band sail off into the night on a darker note. The barnacle encrusted rasp of the vocals gives the creepy outro an atmosphere that reminds me of when Tom Waits played Renfield. I'll give this one a 9 it gave me much more than I was expecting and proves to be one of the more ambitious doom releases so far this year so We shall see how this grows on me from here.