Bog of the Infidel: "Asleep in the Arms of Suicide" 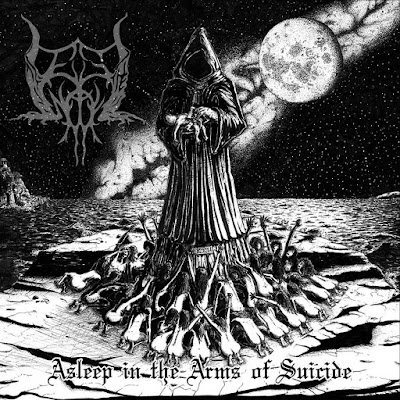 The little intro ditty from this Rhode Island bands offers the hope that this  album might have more thought put into it and suggests more of Dissection direction than the rawer blast fest that follows. I am willing to keep listening and give these guys a shot as there is more of tease toward traditional metal on "Congregation of Judas". It's evident that 1349 is an influence on these guys and they have given their Iron Maiden records a spin. The guitars are the stars of the show here.The drummer keeps up, but perhaps it's the production it feels like he is really having to hustle to keep up. Tonally the drums sometimes sound like trash can being beaten on. The vocals have a dry rasp and sit behind the guitars and sound like muffled growls. Why is it the interludes sound better than the actual songs? Why don't they take that more nuanced sound and combine it with what they do ?

The fact they eventually slow into more of  gallop improves "Coils of the Noose" and the chanting under the less restrained return to acceleration helps stop some of the bleeding. But this artery bursts  soon enough and finds the song reduced to a blur of riffs haunted by the ghost of good ideas. More Maiden influence surfaces this time filtered through the burn of crystal metal in the drumming as we enter "Unravelling the Bracelets of Fortune". Another speed fest that could be any other black metal if they tortured their lead screamer enough. The lead work continues to impress, though the rule around here is "cool riffs alone don't make a good song" this goes double for solos. The bass cuts through on " Eden", but the song remains the same in many ways even with the sped up flourishes of "Phantom of the Opera". The chanted cadence in the background returns, but it's buried deeply in the fuzz.If you get impressed by guitar solos and guitar harmonies then you might want to good ahead and check this album out before I am even done reviewing it.

The closing song "Black Awakening" is 11 minutes long and finds me beginning to tune it out as I am so numbed out to their blasting at this point in time. That two minutes in I find my self being very thankful for the more galloped riff even when they have to bog this infidelity down in color by numbers NWOBHM interplay that is just pumped up and high on speed. The drummer finds himself pulling off some of his best moments of the album on this one, but it's still the guitar players show.I'll round this one down to a 7 because the last song begins to feel very tedious to me. The color by numbers metal is well executed and this album touches upon some fine moments, carrying the torch for traditional metal , but giving it the teeth of black metal.