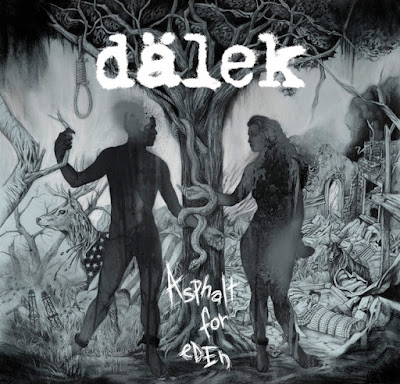 Here is the 7th album by this hip-hop duo, I would call them experimental, but they are doing it right and everyone else is lazy.They come on strong with a dark dense sound, that might be argued to offer a shoe gaze take on hip- hop, but Massive Attack already does that. They continue to get darker on "Guaranteed Struggle". The Mc has skills, but unlike mainstream hip hop where the backing track is often uninteresting the lyrics sit back in the music in a manner that has more in common with punk or metal production that pop music. "Masked Laughter" offers a more space age atmosphere. This gives the song a dreamier sense of melody to set the frustrated lyrical flow against. There is a dirtier abrasion to the more upbeat lyrical flow of "Critical".  Except for the chorus it feels more free-styled in the verses.

The balance of atmosphere and groove is well struck on the instrumental "6db", though it still feels like more of an interlude rather than an actual song. The use of samples works well as an introduction to "Control". There is a surreal murkiness casting it's cloud over the sonic sea of "It Just Is". This could be a Jesu song until the rapping comes in and sets atop of it more like spoken word than having anything in common with Drake of well even Common. It's a raw prose that cares little for hooks and thus creates a more abstract chorus.I'll give this one a 9.5 as all the chances it takes pretty much pays off, the instrumental is not required listening that has to make the journey over onto my iPod, but hip hop needs more of this forward thinking attitude when it comes keeping things fresh instead of the plastic sheen most of it is mass produced with today.

Dälek - Guaranteed Struggle (OFFICIAL VIDEO) from deadverse recordings on Vimeo.
Posted by Wilcifer at 10:25 AM