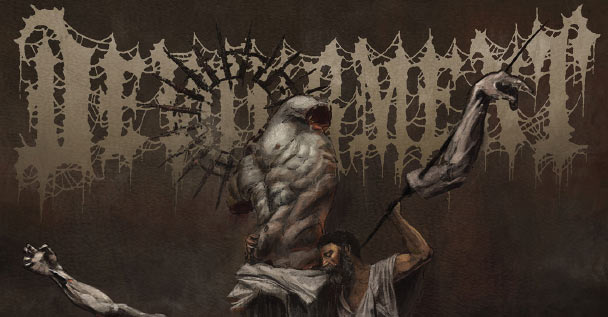 When beginning to put together the work sheet in which I begin organizing the contenders for the album of the year in their respective genres. I saw that death metal did not have many entries, so I am trying to listen to more. Though it could be that I have listened to my fair share of death metal and that it just was not anything special and did not score high enough to qualify. In that case I have to listen to more in that it will be a number's game. By listening to more I crease my chances of stumbling across some that is decent. I think death metal has a hard time since it is very myopic. It only focuses on aggression. The first song on this band's album that was six years in the making falls in line with an aggression heavy approach. The vocals are Cannibal Corpse low. The guitar sound is rawer and darker. I can appreciate their sound.

The problem is the novelty of a cool sound will wear out if they do not write actual songs. You might think this is asking too much from death metal and that I am missing the point. To this I say, I just gave "Altars of Madness"  a listen today and those songs were great. I can think of many other death metal bands who have written great songs, Carcass, Entombed, Deicide, Obituary, Cannibal Corpse, Pestilence, Incantation and Necros Christos all come to mind . So I am only expecting bands to measure up to that. Yes these guys are heavy as fuck, but the elements that help to achieve this are the same that hold them back and make every song sound some what similar. When it is full blast ahead they begin to lose me as it is boring as shit. The heavier more focused chugs are much more effective. The vocals are beginning to get a little annoying as they are such a one trick pony. It sounds like the Swedish chief doing death metal. By "Profane Contagion" I find myself beginning to tune this out and it becomes pummeling white noise fading into the background. The song after this has a little more groove an causes me to tune back in.

"Sculpted in Tyranny" has moment that almost make me bob my head to them, gets mired down in the weight of their own dense sound.  Of course the drumming is great this is a death metal album so that should not even be a thing. "Xenoglossia" is almost too heavy for it's own good. Most musical elements are thrown out the window for the gruesome battery they give their instruments. Only three of the ten songs crack the six minute mark. When they slow down into a more deliberate chug the rewards are more apparent. They do not have hooks but some riffs are more memorable than others. The last song rampages upon you ears with yet another unbridled stomp. Sure this could be one of the top ten heaviest albums of the year, but it is not the most original nor the best written , their sound will be remembered but not the songs.  I will give this album an 8 , which is pretty much the mark all albums have to surpass in order to be in the top 10 of any given end of year list. If you just want heavy as fuck death metal then these guys have you covered.